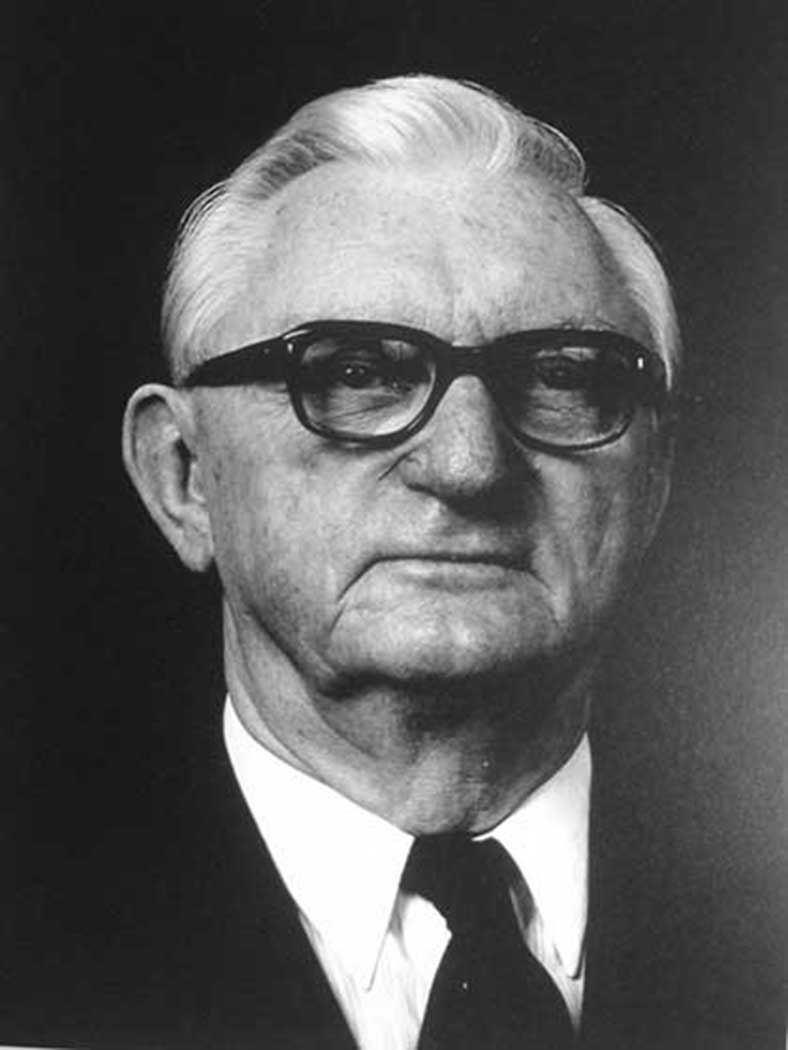 “I was born in 1905, in Russia, in the province of Grodno. By training, I am a primary school teacher and music teacher in general education establishments. In 1933 I graduated from the Teachers' Seminar, and in 1936 from the Warsaw Conservatory. "

This is the beginning of the unfortunately unfinished autobiography of one of the best conductors of the Russian diaspora. Throughout his long life, he combined musical activities and teaching. Wherever he was, in a rural parish in Poland, in a refugee camp in Germany, in a working-class village in Morocco or in a cathedral in Paris, he worked tirelessly, preparing and conducting rehearsals, giving private lessons in music, participating in the musical life of the Russian emigration. Eugene Evetz stands out for his ethical approach to music, his sobriety and at the same time the extraordinary subtlety of his musical intuition and above all his inner nobility.

Yevgeny Ivanovich Evetz was born on November 1, 1905 in the village of Dubiny, Grodno province in Belarus, in a rural environment. His father was a teacher. Graduated from the Warsaw Conservatory in 1936, he worked as a teacher in a Warsaw primary school. In 1939 he held the same post in Bielsk Podlaski, where in 1941 he became principal cantor. The ups and downs of the war threw him with his wife, daughter and three sons in a refugee camp in Germany, where he took up the post of cantor and conductor of the musical life of Russian refugees. Thanks to the enthusiasm of Yevgeny Ivanovich, the daily rehearsals, the music lessons, as well as the rehearsals of the orchestra of folk instruments, allow the Russians who find themselves without a homeland, without a home, without work, and often without family, in difficult camp conditions, to forget the daily difficulties.

After living in the camp for three years, the Evetz family moved to Morocco to participate in earthworks at the invitation of the King of Morocco. Several thousand Russian emigrants arrived in Casablanca. A parish, a children's school and a cultural center were built. One of the main roles in the organization of the life of the Russian community was played by Evetz as a choir director, cantor and teacher. He once again organized children's and adult choirs, a children's musical ensemble and a string orchestra, in which he played the mandola. For each of these musical ensembles he had to write scores, make arrangements, adapt to the unusual composition of the choir or orchestra, and sometimes he himself composed pieces for many concerts. During the 14 years spent in Morocco, Evetz made 93 performances with his choir, in churches - with a religious program, on stages - with a secular program. The performances took place in parishes, schools, retirement homes, in different parts of the Shereefian kingdom, some of which were broadcast on the radio. In the early 1960s, due to political changes in the country, Russian emigrants had to pack their bags, leave this Africa which had welcomed them and disperse throughout the world, to the United States, Australia and Europe.

The Evetz family moved to Paris in December 1962, where Yevgeny Ivanovich quickly obtained the post of cantor (psalomchtchik) at the Saint-Alexandre-Nevsky cathedral. The choir was then directed by Pierre Spassky, who ensured the solemn episcopal services, Evgueni Ivanovitch directing the choir for vigils and during weekdays. In the spring of 1963, two months after having moved from Morocco to Paris, deeply disconcerted by the absence of an active musical life among the Russian youth of Paris, Evgueni Ivanovich founded the "Ensemble de la jeunesse Russe", composed of a youth choir and a string orchestra of folk instruments (balalaika, mandolin and guitar). The first concert took place on June 30, 1963 (six months after his arrival), at the Rachmaninoff Russian Conservatory. His first performance consists of singing Koliadki (traditional Ukrainian Christmas carols, similar to the English Christmas Carol) at Sokol Christmas. The choir then presented religious and secular programs, and the orchestra a program of classical and folkloric works. Very quickly, the ensemble acquired an excellent reputation in the Parisian musical world, not only Russian, but also among the French. Strict discipline, subtle musicality and an extensive repertoire are the main characteristics of the ensemble. While the string orchestra existed until the early 1980s, the choir survived its founder and existed until 1999.

On the death of P.V. Spassky in 1968, Yevgeny Ivanovich was naturally appointed to replace him. The scope of his activity widened and Evetz worked with diligence and perseverance. Young forces were welcomed into the choir of the cathedral.

Concert by the Evetz choir in Reims cathedral in 1968

A change of generation took place, as always, not without gnashing of teeth and resentment ... At the same time, there was a change in the repertoire and style of performance of church chants. If we follow the characteristics of the Russian church singing historian IA Gardner, PV Spassky's performance style is the style of southern Russia, while Evetz, being a graduate of Warsaw, was closer to the St. Petersburg church singing style. However, it must be said that Evetz perfectly understood the works of not only the St. Petersburg school, but also those of the Moscow school. If we look at the list of pieces recorded by the choir under the direction of Yevgeny Ivanovich, out of 69 songs 34 belong to the Moscow School (Kastalsky, Nikolsky, Tchesnokov, etc.). The others are works from the time of Bortniansky, of the St. Petersburg School of which 6 are works by A. Arkhangelsky, who of all church composers was closest to Evetz's heart.

As for the repertoire of songs performed during divine services, the proportions change and come first the works of the “Saint Petersburg School” (Bortnyansky, Lvov, Lomakine, Arkhangelsky, etc.), then that of Moscow. This is because attempts to introduce works by composers of the Moscow School were thwarted by the conservatism and routine of the majority of cathedral parishioners during this period. The choirmaster must have heard many bitter words from various "experts" and "lovers" of church singing, who accepted nothing but what they had heard in their childhood before 1917, in better in St. Petersburg, and more often in some provincial town in the Russian hinterland, which knew nothing but "Bakhmetev's Usuel", the concertos of Vedel and others.

Rehearsal of the Evetz church choir in the cathedral in 1974

Over time, however, Yevgeny Ivanovich will be able to “clean up” the repertoire of the church choir and make it look and feel more appropriate for prayer. During the 26 years of his musical and choral activity in Paris, Evgueni Ivanovich Evetz has performed with the choir more than eighty times, on radio and television, on stage, in festivals, in churches, performing most often church songs, but also Russian classical and folkloric works.

The choir under his direction recorded 5 records of liturgical works, including an "Anthology of Russian Church Song" presenting the stylistic development of church song from Bortnyansky's time to the last representative of the Church. Moscow school, Ivan Alekseevich Gardner. One of the records was recorded with the participation of tenor Nikolai Gedda, who also performed in concerts of church and secular choral music under the direction of E.I. Evetz.

However, whatever a musician's biography and activities, the most important (especially for a church musician) is how he managed to manifest and express this unique talent that the Lord gave him. After all, there were and there are choir directors, cantors and singers who, in the most difficult conditions of exile and emigration, devoted their whole life and strength to the service of the Church. How is Evetz interesting, original and useful for ourselves and for the rebirth of Russian religious singing in our time? It seems to me that he is interesting, first of all, for his style of performing the liturgical song. To understand this, you have to listen to his recordings and immediately appear his style of performance, based on the technical principles of choral performance developed by Kastalsky, Chesnokov, Nikolsky and other masters of the Moscow school. The transparency of the chord, the emphasis on the melody in various harmonizations, the work on the coloring of the vocal timbres, the expressiveness of the liturgical text of the prayer, and at the same time, fidelity to the intention of the composer in nuances and spiritual expression. Yevgeny Ivanovich paid special attention to the pronunciation of the text by the choir. Indeed, in the conditions of exile, it was not easy to preserve the purity of pronunciation not only of Russian, but especially of Slavonic. And Yevgeny Ivanovich watched it very closely.

His musical activity was not limited to conducting choirs. He also taught at the Russian Language Study Congress in Koenigstein. He composed anonymously works sung at Daru including Елице во Христа крестистеся and the song of the good thief in several versions for male choir, female choir and mixed choir.

The song of the good thief in women's choir by the Znamenie choir of Paris (composition by E. I. Evetz)

Sometimes criticisms are made about the performance style of E.I. Evetz: "everything is cold, without soul, without emotions". However, the years go by and tastes change. The perception of these pillars of choral art like S. Jaroff and others is changing and some things are no longer acceptable to us. While the choir's recordings under the direction of E.I. Evetz retain their freshness, novelty, originality and high musical quality. This is the lot of rare talents. The legacy of E.I. Evetz is an inspiration to the new generation of choir directors and church singers. And this was the purpose of the tireless work of one of the most remarkable masters of the art of Russian religious singing of the twentieth century, and even of Russian choral singing in general. With his work, Yevgeny Ivanovich Evetz did everything to transmit to all of us, and in particular to the new reborn Russia, a pure and living tradition of religious song from past Russia. Without a doubt, he succeeded.

Evgueni Ivanovitch Evetz passed in 1990. He is buried in the Russian cemetery of Sainte Geneviève des Bois.