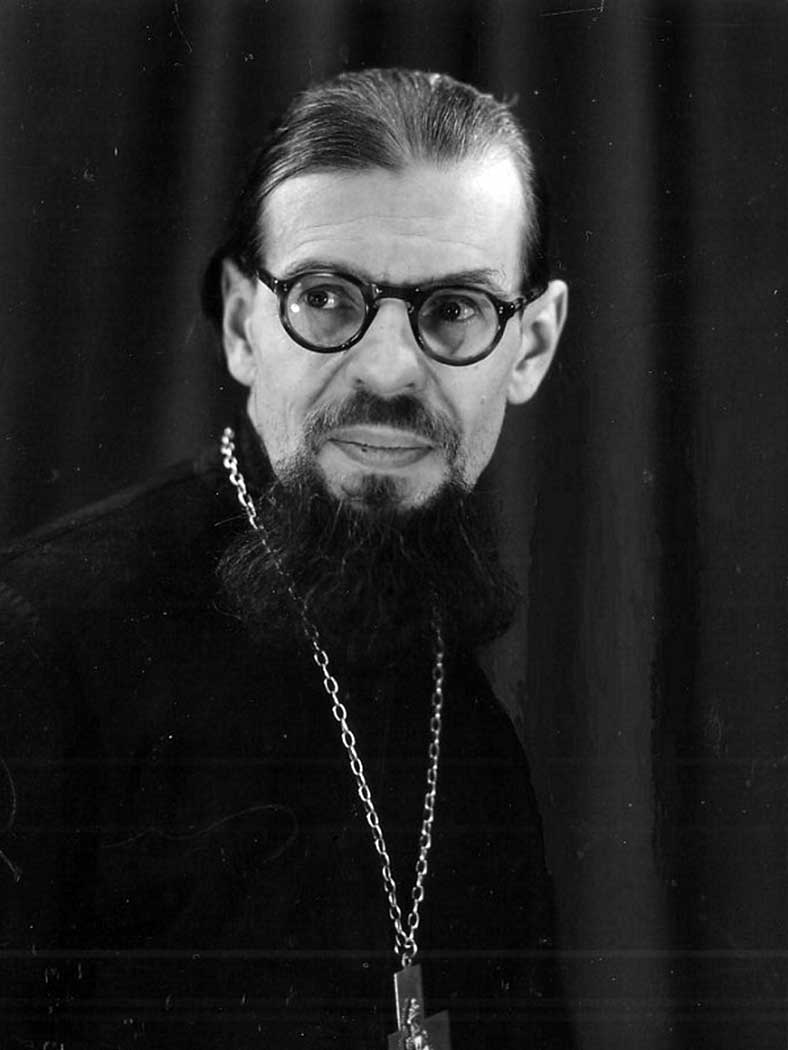 Throughout his life, Leonid will have fragile health, combined with great sensitivity. He is very gifted for music: at the age of twelve, in 1914, he gave piano concerts in the presence of wounded soldiers on the Prussian front. He composes musical pieces which are admired by those around him. In 1910 he entered the "gymnasium". Throughout his studies, he is first in class, in all subjects.

The events of 1917 put an end to Leonid's studies. He is fifteen years old. His family is evacuated to the Don. The Chrol family settled temporarily in the Kaminskaya "stanitza", and Leonide resumed his studies. Trophime finds a new post: he is hired for the reorganization of the Mint, in Novocherkask, a town in the Caucasus. The whole family moves there. But the Red Army is making progress. The Administration retreated to Novorosiysk, a town on the shores of the Black Sea, not far from Ekaterinodar. In 1920, the Chrol family left Russia for good, aboard one of the very last ships that managed to set sail before the last Communist invasion. It's the end of a world. Leonide was then a young man of eighteen.

Leonid was ordained a deacon on December 9, 1934, and acceded to the priesthood on the following December 16. From now on, we will talk about "Father Leonid": the cassock and the pectoral cross will be part of his very recognizable silhouette.

Mgr. Euloge immediately sends Father Léonide to Toulouse. This parish, founded in 1928, which covered the whole of southwestern France, had the reputation of being "the most difficult in France" in the words of Metropolitan Euloge ... Three priests had passed there: Father Nicolas Soukhikh , Father Vladimir Aïsov, and Father Hilarion Titov. All three experienced great pastoral difficulties. After Father Hilarion had declared forfeit, the parish was handed over to Father Soukhikh who died shortly after. Mgr. Euloge adds this comment: "it was indisputable that the overwork due to the continual displacements had worn out his health". This gives an idea of ​​the challenge that was offered to the rector of the Orthodox Church.

Father Léonide officially became rector of the parish of Montauban in 1941, at the start of the war. Father Postavsky encountered difficulties in his relations with the difficult parish of Toulouse. As we see in the attached document, Father Léonide was watched by the Vichy Government probably following a slanderous denunciation.

This letter, dated 1941, tells us that Father Leonide was suspected of recruiting Russian emigres so that they could enlist in Soviet troops! The letter restores the reality of the facts, by showing that the activity of Father Leonide was not of a political nature.

On August 19, 1944, two thousand “Mongols” arrived by road from Paris and established their quarters in the Pomponne barracks in Montauban. These soldiers were actually Chechens and Ingushes who had passed from the Red Army to the Wehrmacht with the Vlassov Army. A large number of Soviet prisoners of war had been drafted into this army. The concern of the population was all the more acute as a clash between these troops and young Montalbanese resistance fighters had claimed seventeen victims of the latter. The soldiers were shooting and scrapping in the city center. Several resistance fighters were hanged. The situation was extremely tense.

These heavily armed soldiers were no longer in supply. They didn't speak a word of French. The prefecture turned to Father Leonide, fearing that a serious incident would occur between the soldiers and the population. Father Leonide left without hesitation. His knowledge of Russian and German was invaluable in such circumstances. Dressed in a white cassock and the white flag in his hand, he began difficult negotiations, in Russian, with these crude and worried men. He obtained a form of armistice from them, which certainly saved the town of Montauban from what could have been a catastrophe. It should be remembered that the 2nd SS “Das Reich” division was quartered in Montauban; it committed numerous massacres and exactions during its progression from the South of France towards Normandy. The concern of the Montalbanian population was amply justified.

Twenty years later, in 1964, the grateful municipality of Montauban placed at the disposal of Father Léonide - for the rest of his life - a large house which had belonged to Pastor Charles Westphal - Pastor of the Reformed Church of France, which was an ardent protagonist of nascent ecumenism (1896 - 1972). This house was located in Pont-de-Chaume. Father Leonid lived there with his sister Olga. In 1957, Prince Alexis Kropotkin joined them. Faithful among the faithful, he was "the shadow" of Father Leonid, and accompanied him everywhere. A church dedicated to the icon of Our Lady of Prompt-Secours was set up in the old greenhouse of the large house at Pont-de-Chaume. In this house, Father Leonid improvised or played his musical works on an old piano that was more or less out of tune, sometimes letting himself be drawn into a real trance. There he also produced works of "art brut", made of heterogeneous pieces (everyday objects, coins ...), assembled according to a logic of which he kept the secret.

From this house which was generously open to everyone, Father Léonide shone in the region. It had set up a "mobile church": Prince Alexis Kropotkine led their 2 CV, and on board were Father Leonide and his sister Olga, who served as cantor. It is interesting to note that this 2CV was offered to Father Léonide by the Roman Catholic Archbishop of Albi (it is very probably Mgr. Jean-Joseph Moussaron, who was Archbishop of Albi from 1940 to 1956. With this vehicle, Father Leonid, his sister Olga and Prince Alexis Kropotkin could thus celebrate the Uffizi in the most remote corners of the South-West of France, as soon as they were called to a sick or dying person - unless a family needed the celebration of a baptism or a wedding. For half a century he roamed the roads of the region, with his high stooped waist, long hair and beard, as well as his cassock further lengthening his silhouette.

Mgr. Jacques de Saint-Blanquat, Roman Catholic bishop of Montauban at the time, spoke of Father Léonide in these terms: “The priest lived in Montauban with his driver. (...) He was a colorful philosopher. He had written a book called "Alpha and Omega" rather obscure, but undoubtedly very deep. He was a musician, a painter. He lived with his sister who had a great quality of heart and his driver, an authentic Russian prince (…). In short, a most picturesque and charming trio, very endearing! "

In the 1950s, the parish of Toulouse appealed to Father Léonide, and the latter came to celebrate there occasionally. It was not until 1971 that he was finally appointed rector of this parish. From that moment on, his pastoral care extended to nine departments in the southwest of France - as far as Perpignan - until his death.

During the summer of 1980, illness reached Father Leonide and immobilized him. He had suddenly lost the use of his legs. At the beginning of November 1982, Father Leonide received Communion for the last time on this earth. Then he was praying day and night, until he passed out on Sunday, November 21, a week before his death. On this day, a priest - Father Jean Baïkoff - recited at his bedside the long and moving prayer for the dying. Before he died, Father Chrol went forty days without eating. In the very last days, he couldn't even take any cash. Finally, for a few days he had been put on a drip, but it only brought brief relief, which had to be given up.

Moments before leaving this world, he motioned to his faithful companion Alexis Kropotkin to approach, and said to him in a barely audible voice:

It was Sunday November 28, 1982, at 7 p.m., at his home in Pont-de-Chaume, near Montauban. The funeral was celebrated on Wednesday, December 1, 1982, in the chapel of Our Lady of Prompt Help, adjacent to the house of the late Father Léonide. They were celebrated by Archbishop Georges Wagner, concelebrating with Father Eugene Czapiuk and Father John Baïkov. Mgr. Jacques de Saint-Blanquat, Roman Catholic bishop of Montauban, and several priests from his diocese were also present during the celebration. Among them was Father Guy Lourmande, who was then the "Regional Delegate for Ecumenism". The presence of Pastor Alain KUSNER (E.R.F.) of the Temple of Montauban, was also noticed. The church was not enough to contain the very large attendance of those who had come to pay a last homage to Father Leonid: many people had to attend the Liturgical Office from outside, in front of the open doors, in the bitter cold of this winter day. A very long line of cars formed to accompany the remains of Father Léonide to the Old Cemetery of Montauban. His tomb is surmounted by a large oak cross.

The house that Father Leonide occupied no longer exists; it disappeared under the peak of the wreckers, to make way for a freeway slip road. On the other hand, Montauban perpetuated the memory of Father Léonide Chrol by giving his name to an avenue which extends from Boulevard Herriot towards the south-eastern bypass of the city.