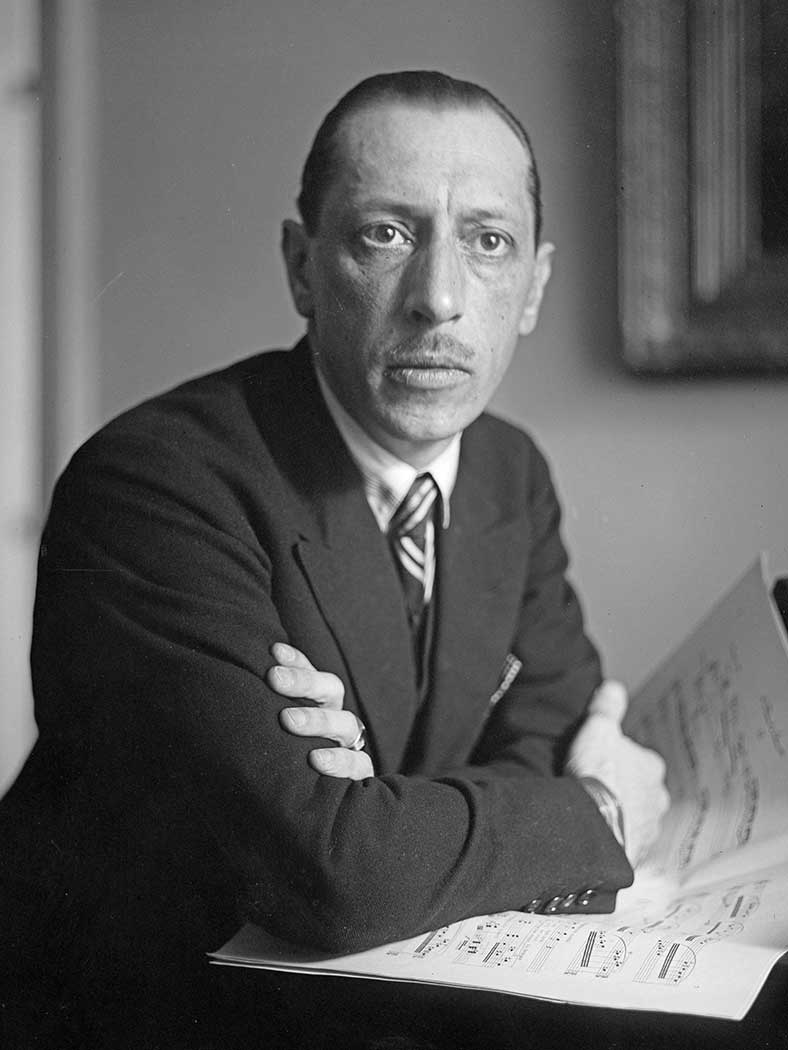 Igor Stravinsky was born in 1882, in Oranienbaum/ Lomonosov (Russian Empire) and died in 1971 in New York. He was a composer, conductor and pianist of modern music, considered one of the most influential composers of the twentieth century whose work spans almost seven decades. His path crosses with the parishes of the Archdiocese in Nice and Grenoble. At the end of 1924, Stravinsky and his family moved to Nice. It was a period during which he composed three important works: the opera-oratorio Oedipus rex then Apollo Musagète (in 1928) and the Symphony of Psalms (1929-1930).

At the end of 1924, Stravinsky and his family moved to Nice. Her he met Fr. Nicolas Podossionov, who will have a strong influence on the composer and his returning to the Church. It was a period during which he composed three important works: the opera-oratorio Oedipus Rex then Apollo Musagète (in 1928) and the Symphony of Psalms (1929-1930). The spiritual dimension of the latter is only one example of his deep inner religious life. At the time, Stravinsky, who was baptized Orthodox but who had distanced himself from religion, experienced a profound spiritual transformation that brought him back to a faith that his friend, the great musician Nadia Boulanger, described as extremely fervent.

Ivan Moody, renowned composer, theologian and specialist in Orthodox liturgical singing writes about this period that “Stravinsky had, after an absence, returned to the Russian Orthodox Church in 1925 or 1926 (he himself was not clear about the year), and recorded that the poor quality of both music and singing in the Russian Church at Nice led him to write the Three Sacred Choruses, as the Lord’s Prayer, the Credo, and Ave Maria are sometimes collectively known. They were actually completed at different times: in 1926, 1932, and 1934 respectively. They are simple and severe; wishing to try to establish connections with a tradition of Church music earlier than the utterly Italianate Bortnyansky, Stravinsky partly invented and partly remembered (from the services he had attended in his youth) a plain, syllabic style, essentially modal in harmony. The pieces are, for this very reason, extremely moving. The Latin versions of the texts were made later; and the composer also made a version of the Credo in 1964... “

During the years 1931-1935, he lived in Voreppe located 25 kms from Grenoble, at the Villa de la Véronnière (currently Médiathèque Stravinsky) and created several works in the region. Stravinsky attended the parish of the Resurrection of Christ of Grenoble. The contemplation of the beauty of the Alps, inspired Igor Stravinsky. In the region, he frequented the painter Dimitri Stelletsky. Sojourning in the region did Prokofiev also come with his friend Stravinsky to pray at the Church of the Resurrection of Christ? Circumstancial evidence makes it possible to affirm this, including the testimony of Nadia Boulanger. Stravinsky, composed in Voreppe the Duo concertant for violin and piano (1932) as well as the Concerto in D for violin (1931) for his dear friend violinist and collaborator Samuel Duchkin “who gives him all the indications for their composition” and with whom he frequented the circle of violinists of Grenoble. During this period, at the request of his son Soulima, Igor Stravinsky composed, specially for him, the Concerto for two pianos. In Grenoble, her two daughters take, one, Mika, painting classes on fabric at the School of Fine Arts, the other, Milène, sewing and cooking classes with the sisters.