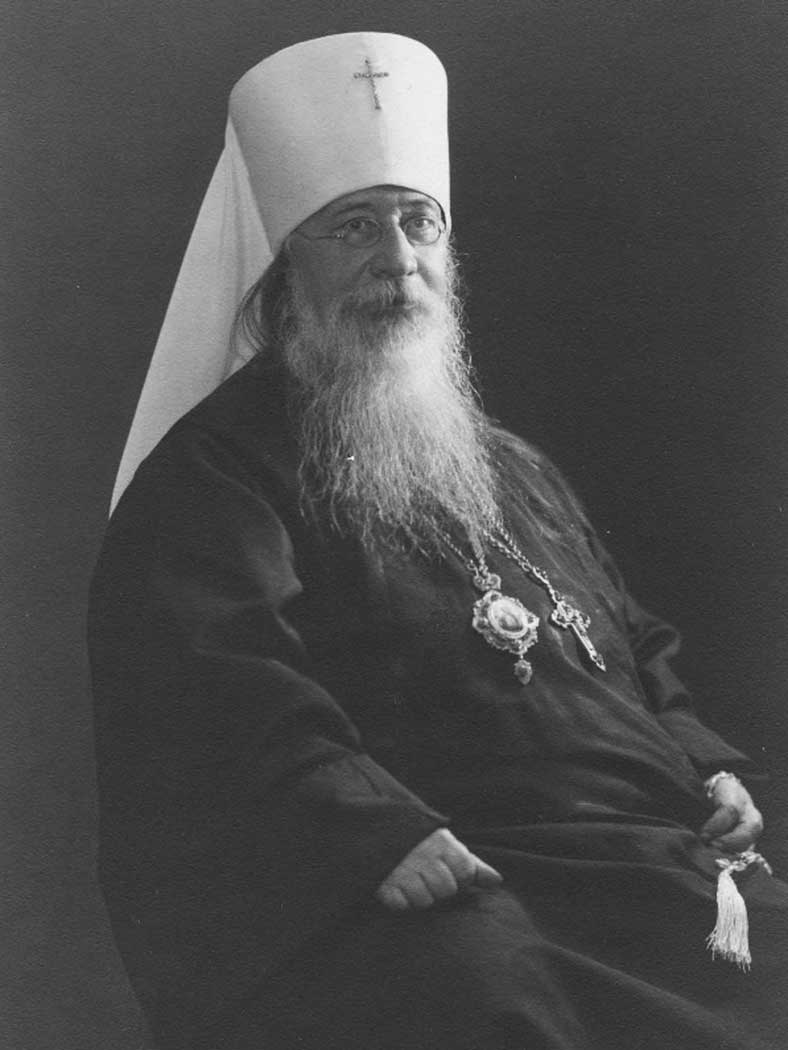 After his secondary studies at the Ecclesiastical School of Belev and at the Seminary of Tula (180 km south of Moscow), Basil Georgievsky entered the Academy of Theology of Moscow. After finishing the Academy en 1892, Basil was employed as a tutor for the family Lopukhin in Moscow. Six months later, in 1893, he obtained the post of adjunct inspector of the diocesan school of Efremov (120 km south of Tula).

On February 3 of the year1895, when he was 27 years old, he received the monastic tonsure with the name Eulogy. On February 12 he was ordained hieromonk and was appointed professor of Greek at the Seminary of Tula. The following year he became inspector at the Seminary of Vladimir. Two years later, in 1897, he is appointed Rector of the Seminary of Kholm (in Poland under Russian domination). Finally, on January 12 of the year 1903, hieromonk Eulogy is ordained Bishop of Lublin, as vicar of the diocese of Kholm-Warsaw. In 1905 the vicariates of Lublin and Sedlets are united into one single diocese with its episcopal see in Kholm headed by Bishop Eulogy.

In 1907 Bishop Eulogy was elected deputy of the province of Kholm at the second Duma of the Empire, and re-elected at the third Duma. The main task of Vladyka Eulogy consisted in obtaining an administrative status for the province of Kholm, as well as its integration in Russia. When this task was succesfully accomplished, Vladyka Eulogy was elevated to the rank of Archbishop in 1912.

In 1914, just before the beginning of the First World War, Archbishop Eulogy was appointed to the see of Volhynia, and when the Russian armies had occupied Galicia, he was charged to administer the Orthodox parishes in the territories which were occupied by the Russian army, with Lvov at its center. Many Uniate parishes decided of their own free will to return to Orthodoxy. In July 1917 Archbishop Eulogy was called to take part in the Preconciliar Conference, and when the Council of the Russian Church opened on August 15 of the year 1917, he was elected president of the committee on « Worship, Preaching and Liturgical Art ». After the election of Patriarch Tikhon, Archbishop Eulogy was elected member of the Patriarchal Synod.

On December 4 of the year 1918, when he was in Kiev at the Council of the Church in Ukraine, Archbisbishop Eulogy was arrested together with Metropolitan Anthony (Khrapovitsky) by the separatists of Petlura, and after the victory of the Poles the two Hierarchs became their prisoners. Only nine months later they were liberated through the intercession of Clémenceau. In August 1919 they arrived at the region of Kuban which was in the hands of the army of General Denikin, passing through Bessarabia and Constantinople.

Not being able able to return to Volhynia, Archbishop Eulogy accepted the invitation to go to Serbia and he left Novorossiysk on January 16 of the year 1920. In Serbia Archbishop Eulogy made acquaintance with the Patriarch of the Serbian Church, many other Hierarchs, as well as King Alexander. At the beginning of the school year in September 1920, having passed the summer at the monastery of Grgeteg, Archbishop Evlogy teaches at the Institute for the girls of the Don which had been evacuated to Bela Crkva.

In the beginning of the year 1921, Archbishop Eulogy is charged by the provisionary direction of the Russian Churches abroad, presided by Metropolitan Anthony (who had left the Crimea and resided temporarily in Constantinople), with the administration of the Russian Orthodox parishes in Western Europe. Via Vienna and Prague he arrives in Berlin during Holy Week, accompanied by archimandrite Tikhon (Liatchenko).

In 1921 Archbishop Eulogy receives from Patriarch Tikhon a decree, dated April 8, in which he appoints him head of the Russian Orthodox parishes in Western Europe with the rights and prerogatives of Diocesan Bishop. He receives also a letter from Metropolitan Benjamin of Petrograd, confirming his jurisdiction over those parishes which until now depended on the Metropolitan of Saint Petersburg (later on Petrograd). These actions of the Holy Patriarch Tikhon and the Holy Metropolitan Benjamin lay the foundation of the canonicity of the ecclesial activities of Metropolitan Eulogy in Western Europe. In January 1922, by Patriarchal Decree, Vladyka Eulogy is elevated to the rank of Metropolitan.

During the summer of 1921 Vladyka Eulogy visits the parishes in Paris, London, Cannes, Nice and Menton. In the autumn of 1921, during the Ecclesial Congress of the Russian emigration in Karlovci (Serbia) Vladyka Eulogy and other delegates do not endorse the official declaration of the Congress in favor of the restauration of the Romanovs on the Imperial Throne of Russia. They considered this document as a way of using the Church for political purposes. In the month of June 1922 Metropolitan Eulogy received from Moscow a Patriarchal Decree, dated May 5, 1922, which orders the dissolution of the Provisional Direction of the Russian Churches Abroad, having its See in Karlovci, as a result of the political positions taken by this Direction. And it confirms Vladyka Eulogy’s position as the head of the Russian Orthodox parishes abroad. Nevertheless, the Synod of Bishops in Karlovci was of the opinion that it was not necessary to take into consideration this Patrarchal Decree. Metropolitan Eulogy, out of respect for Metropolitan Anthony and the other Bishops with him, conceded and did not take on himself the fullness of power which nevertheless was conferred to him by Patriarch Tikhon.

In order to educate its future priests which the Russian emigration needed, Metropolitan Eulogy founded, in 1925, an Orthodox Theological Institute (Saint Sergius Institute) in Paris. Illustrious intellectuals of the Russian emigration were invited to teach at Saint Sergius : theologians, historians and philosophers. Metropolitan Eulogy was its first Rector. He received a doctorate honoris causa in 1943. Rapidly in all countries of Europe, especially in France, new parishes were founded. According to the sources of the Administration of the Diocese during the years 1928-1938, Metropolitan Eulogy administered at the time more than 110 parishes or communities which extended from Finland (2 parishes) to Maroc (3 parishes), from London to Florence, and in Holland (2 parishes), in Czechoslavakia (4 parishes), in Germany (7 parishes) and in France (more than 70 parishes). He was assisted by several auxiliary Bishops : Archbishop Vladimir in Nice (1925-1946), Archbishop Alexander in Brussels (1929-1940), Archbishop Serge in Prague (1924-1946), Bishop Benjamin (1927-1930) and Bishop John (1932-1946) in Paris.

In 1927 Metropolitan Eulogy had to face a new conflict, this time with the Patriarchate of Moscow. Metropolitan Sergius of Nizhny-Novgorod, at the time locum tenens of the Patriarchal See of Moscow, accused the clergy of the emigration of taking « contra revolutional positions » and demanded a declaration of loyalty towards the Soviet regime. Metropolitan Eulogy affirmed his apolitical stance, and underlined that the members of his clergy could not have ties with a State of which they were no citizens. In 1930 this conflict, too, resulted into a rupture, when Metropolitan Sergius reproached Metropolitan Eulogy for his taking part in ecumenical prayer services for the persecuted Russian Church. When Moscow ordered him to resign, Metropolitan Eulogy appealed to the Ecumenical Patriarch and traveled to Constantinople. Patriarch Photius II offered him his total support and took him under his obedience with the title Exarch within the structure of a « Provisional Exarchate for the Russian parishes in Western Europe ». Gradually the new canonical situation was accepted and validated, even though certain clerics left the Diocese to join the jurisdiction of Moscow.

Monsignor Euloge at an ACER congress in 1930

In 1934 Metropolitan Eulogy traveled to Serbia, to meet with Metropolitan Anthony on his bed of illness, with the hope of a reconciliation. This reconciliation was achieved, but did not make an end to the intrigues of the Synod of Karlovci, especially in Germany.

From 1939 onwards, Metropolitan felt that his strenght began to decline. In particular he suffered from a progressive deafness. During the War, which he spent in Paris, and being cut off from more than half of the parishes of his Diocese, Metropolitan Eulogy followed the political events with a great interest, in particular the successes and failures of the Soviet army. Like many Russian emigrants at the time, he felt after the War an irresistable attraction towards his native country. This led him to start negotiations with the new Patriarch of Moscow, Alexis I, recently elected. A delegation of the Patriarchate of Moscow arrived in Paris, led by Metropolitan Nicholas of Krutitsy. On September 2 of the year 1945, Metropolitan Eulogy concelebrated with the Metropolitans Nicholas and Seraphim (Lukianov), the former representative of the Synod of Karlovci in France, at the Cathedral Saint Alexander Nevsky, in Paris.

However, most of the members of the clergy and laymen did not share this penchant of their elderly Primate for the return to the Patriarchate of Moscow, to start with Archbishop Vladimir, auxiliary Bishop in Nice since 1925, who at the end of the War was called by Metropolitan Eulogy to come to Paris to assist him and administer the Diocese during his illness. During the Pastoral Assembly of August 1945 in Paris they publicly expressed their opinion. During the months which followed, Metropolitan Eulogy openly questioned the wisdom of the steps taken by him, the more so because the Patriarchate of Moscow took decisions without consulting him and the Patriarch of Constantinople did not make haste to give his approval for the return into the jurisdiction of Moscow.

Metropolitan Eulogy died on August 8 of the year 1946, in his small appartment in Rue Daru, next to the Cathedral. His funeral took place on August 12, under the presidence of Metropolitan Gregory of Leningrad. Two days earlier Metropolitan Gregory of Thyatira, Exarch of the Ecumenical Patriarch in Western Europe, came to pray before his coffin. Metropolitan Eulogy was buried in the crypt of the church of the Dormition at the Russian cemetery in Sainte-Geneviève-des-Bois (Essonne), which he had consecrated a few years earlier, in 1939.