The creation and existence in the Russian emigration of a theological school not elementary nor secondary but higher, born in conditions of exile and which could live for many decades without the support of a State or of an established and powerfully organized Church is quite exceptional. But the Russian emigration, in which the Institute was born, was also quite exceptional.

At its beginnings, it represented a mass of some two million individuals, nearly half of whom were made up of the intellectual and cultural elite of a large people, an elite who intended to keep and extend the traditions which were theirs outside of borders of her country, from which the great historical catastrophe which followed the First World War had driven her. One of the strongest and most resilient nuclei in the midst of this mass was the Orthodox Church.

In order to survive and continue her work, the Church needed a Theological School. But besides this need to continue training an Orthodox clergy, the Russian emigration of the 1920s began to feel a keen interest in questions concerning the Church and theology. Popularization courses on religious issues were organized here and there, notably in Constantinople, Belgrade and Paris. In the French capital, in the premises of the Russian Embassy (this was before the recognition in 1924 of the Government of the Soviets by France), sessions were frequently held during which lectures on exclusively religious subjects were presented. Many of the large audience attending these sessions expressed a desire for more systematic theological training.

In 1921, Metropolitan Euloge came to Paris, who at that time had his episcopal seat in Berlin. He gave his blessing to this initiative. The opening of the Higher Course in Orthodox Theology, which lasted from February 1921 until the summer of the same year, was announced. Consideration began to be given to the creation of a School of Theology providing regular education.

In the summer of 1922, taking advantage of the visit to Prague of Dr John Mott, president of the World Federation of Christian Students, Academician PB Struve, assisted by Father Georges Chavelsky and AV Kartachev, gave him a written communication reporting on the urgency that there was to create for the mass of Russian emigres a Higher School of Theology and also underlining the fact that the conditions which made such an enterprise possible, were indeed met. A few months earlier, in Shanghai, Dr Mott had already received a similar project, given to him by L.A. Zander, then a lecturer at the University of Vladivostok, from the Beijing Christian Students Congress. Dr Mott, a man open to vast perspectives, gifted with a charisma that could be described as prophetic, who had also been the friend of the Russian missionary bishops Tikhon (the future Patriarch of Moscow and all Russia) in the United States and Serge in Japan, could not fail to take such a project to heart. Paris increasingly appeared to be the most suitable place for this school, for it was there that in 1923 Metropolitan Euloge established his episcopal seat.

In June 1924, at the ACER congress in Argeron, Metropolitan Euloge, who was there, received the news announcing that Dr. Mott was making available to him for the foundation of the future School of Theology a sum of $ 8,000. . The following month, on the feast of Saint Sergius (July 5/18), thanks to the unparalleled tenacity and energy of Michel Ossorguine, the property located at 93 rue de Crimée was bought at public auction. , in the XIX ° arrondissement, which has since become “Serguievskoïe Podvorié”. Thanks to the sum received and the acquisition of the said property, the opening of a Graduate School of Theology became feasible. Yet those who had presided over its origins did not dare in their modesty to give it the traditional name of Academy; they called it the Institute of Orthodox Theology, after and as a continuation of the Institute of Orthodox Theology which operated in Petrograd from 1919 to 1921 after the closure by the Soviet Government of the four Academies and all other theological schools. 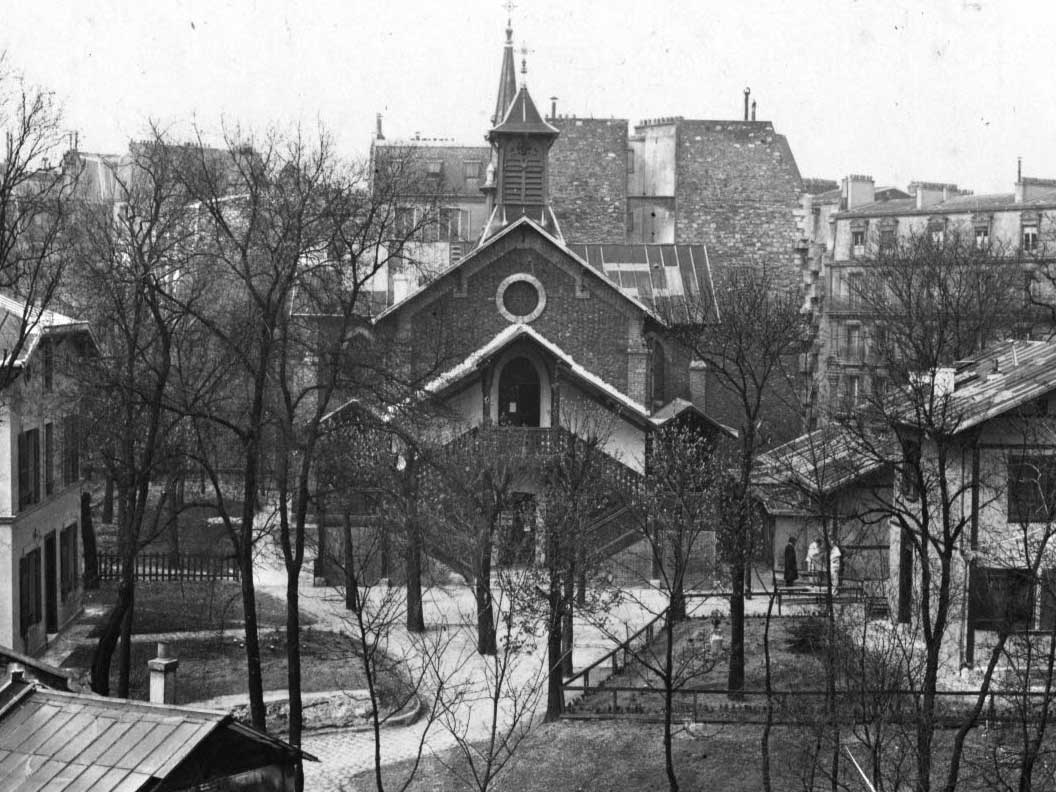 Applications for admission came in the dozens, mainly from the center of Prague, where most of the student body emigrated from Russia had gathered. But the possibilities as to the number of those who could be admitted were necessarily limited, both because of the small number of scholarships and the small size of the premises that could be allocated to the boarding school that one wanted to create in a context of necessary budgetary savings and priority given to the religious formation of future candidates for the priesthood. We did not yet have very specific ideas on the level of the applicants. In addition, the professors solicited were slow to reach Paris. At the beginning of 1925, there were only four members of the future teaching staff:

At the start of Great Lent the church was consecrated and the restoration of the premises was completed. The whole was poor, but livable. We lit not with electricity, but with gas, the school equipment (tables, benches, chairs, tables) was dilapidated. Classes began immediately after Easter, on the Thursday of Thomas' week. It was April 30, 1925, which is considered to be the beginning of the institute's activity. So that Metropolitan Euloge, Rector of the Institute, could be present at this beginning, the first class had been fixed for the evening. At 5 o'clock in the afternoon the thanksgiving of ﬁ ce was celebrated in the church for the start of school lessons, Professor Kartachev presented the inaugural lesson which dealt with the history of the Church and addressed, in particular, the problem of the preaching of the apostle Andrew among the Scythians and the spiritual links which unite this disciple of Christ to Russian Christianity. Classes continued uninterrupted throughout the summer of 1925. In autumn, renowned teachers arrived in Paris and began their teaching:

In October, after examinations which eliminated certain weak or occasional elements, the propaedeutic course was admitted to the academic cycle and teaching began in accordance with the program of a graduate school of theology. The students were excited about the prospect. The faculty welcomed new members and saw an increase in its scienti ﬁ c authority. Arrived from Berlin to help Professor Zenkovsky in teaching philosophy, V.N. Iljine, his former student at Kyiv University. Soon arrived from Prague and took part in the teaching of the Institute:

Michel Ossorguine taught the rubrics. A little later, the faculty also included young graduates of the Faculty of Theology in Belgrade:

Other professors like Constantin Motchoulsky (Russian thought) and Vladimir Weidle (history of Christian art) also taught at the Institute on a regular basis. The work accomplished by this first team of teachers in the period between the wars was immense and more than fruitful in terms of religious thought as well as of pastoral formation and ecumenical relations. But the Institute also knew how to prepare a succession among its own students.

World War II nearly called into question the very existence of the Institute, but it was miraculously saved and was able to continue its activity during the hard years of occupation and turmoil.

After the war, the Institute became both an inter-Orthodox and an international school of theology in terms of both its membership and its faculty. He received students of all nationalities. Gradually alumni formed the faculty. To these professors, from the Institut Saint-Serge itself, and who represent not only the second, but also the third and even the fourth generation, have joined people from French and foreign universities.

His work continues to be considerable. We can judge by the publications of its professors, the number of its students who have come out of its walls and who occupy positions of the utmost importance in the Church, the great renown of the Liturgical Study Weeks.