The emergence of a Russian church in Paris is closely linked, as in most countries, to the exchange of diplomatic missions. Relations between France and Russia date back to the 11th century, when Anne of Kiev, daughter of Yaroslav the Wise, married Henry I King of France (1051). There are, however, no permanent representations until the visit of Peter the Great in France in 1717. Closer diplomatic relations are then established and a permanent embassy is opened, near which however there will not yet be a church. We had to wait for the decree of Tsar Alexander I of February 12, 1816 on the establishment of a church of Greek-Russian confession near the diplomatic mission in Paris. This will be the beginning of the uninterrupted existence of a Russian church in Paris.

Paris was unique in that it had a large Orthodox colony, made up of Russians but also of other nationalities. A church dedicated to St Peter and Paul was first created in rented premises (rue de Mesley then rue de Berri) which were obviously too small to accommodate all the Russians who wanted to attend and if we consider all the Orthodox, the need for a larger church located in an independent building became obvious.

Since 1847, Father Joseph Vassilieff, Rector of the Russian Church in Paris, Doctor of Theology from the Academy of Saint Petersburg, devoted all his energy to this project. He is to be credited with all the initiative, steps and efforts that were necessary to bring this unique undertaking to a successful conclusion. His generous initiative came up against many difficulties; the conditions were not very favorable (the Crimean War took place from 1853 to 1856) and the Russian government and the Holly Synod categorically refused Father Vassilieff any subsidy for the construction of the building. He then considered private financing, a subscription. But he needed an authorization to launch it and it was only in 1856, after two other refusals, that he obtained the authorization of Tsar Alexander II to open this subscription.

This church was intended not only for the Russians, but for the entire Orthodox community. Its construction also became everyone's business. All components of the society participate in it. The Orthodox of Paris, Russians, French, Serbs, military or nuns, merchants of the Nizhny Novgorod fair that Father Joseph approaches in person, even the Tsar Alexander II himself on his personal cassette, were involved in the fund raising. Each one contributes according to his means, from 20 centimes for a Greek student at the Sorbonne to 100,000 francs for a Greek patron. The Orthodox were joined by Catholics and Protestants.

In 1857 and 1858, two adjoining plots of land were acquired for the construction of the church. We owe the project of the building to the architect Kuzmin, while Strohm is the master builder; both are members of the Academy of Fine Arts of St Petersburg. When Napoleon III gave his approval for the project, it is said he qualified it as "curious, original, but very beautiful".

The church is made of white freestone in the Russo-Byzantine style. The architects, iconographers and artists who worked on it were inspired by the documents drawn up for the major restoration work in 1847 on the Basilica of St. Sophia in Constantinople, which explains the "Russo-Byzantine" designation of the style.

The first stone was solemnly laid on March 3rd 1859 and the work was completed in August 1861. Dedicated to Saint Alexander Nevsky, the dedication ceremony was celebrated by Bishop Leonce (Lebedinsky) on August 30 (old calendar), i.e. September 11 1861, the day of the feast of the relocation of Saint Alexander relics from the city of Vladimir to Saint Petersburg (1724).

The Russian Church in Paris then had the same status as all Russian churches abroad. It was attached to the Metropolitan of St. Petersburg and Ladoga.

On June 7 1867, after having escaped an attack in the Bois de Boulogne the day before, Emperor Alexander II and his wife Empress Marie, on an official visit to France, attend a Te Deum in the cathedral. Accompanying them in their prayers were the Emperor Napoleon III and his wife, the King of Prussia William I and his Prime Minister Bismarck, the Grand Dukes Alexander and Vladimir as well as the Grand Duchess Marie. The attack took place on Ascension Day and for having been saved, the Tsar presented the church with two icons, one of the Ascension and the other of Saint Alexander Nevsky. In 1896, Emperor Nicholas II and Empress Alexandra also began their official visit to Paris with a Te Deum in the cathedral.

Outside views of the cathedral

During the Civil War, after the evacuation of the White Army from the Crimea, His Holiness Tikhon, Patriarch of Moscow and all Russia, entrusted the administration of Russian churches abroad to a collegial ecclesial leadership. In March 1921, he established Archbishop Euloge as Head of the Russian Churches in the West. When Archbishop Euloge, who had become a metropolitan, settled in Paris, the Church of St. Alexander Nevsky became the seat of the fledgling archdiocese. Parish statutes, drawn up in accordance with the rules of the Council of Moscow, were adopted and the religious association was declared to the French authorities in 1923 in accordance with the law, which formalized the parish life that had existed since the construction of the church.

The church became the spiritual center of the Russian colony in France and when Metropolitan Euloge established the seat of the archbishopric there, it became the spiritual center of the Russians scattered across Western Europe. At the end of the revolution, it is estimated that the Russian population scattered outside Russia icame to two or three million people. A significant part of this "Russia outside the borders" has regrouped in Western Europe and the church becomes the center, not only of the spiritual, but also of the social life of the emigration. All those who have found asylum in France flock there to find solace and prayers after having suffered the torments of the revolution. Many of the new arrivals hoped to find relatives or comrades in arms there. The spiritual community that settled there attracted more and more people to the church of St. Alexander Nevsky. Many of those who had fought in the various units of the Imperial Army or the White Army were taken there to their final resting place. Until 1945 St. Alexander Nevsky was also the church of the Serbian and Bulgarian embassies in France. 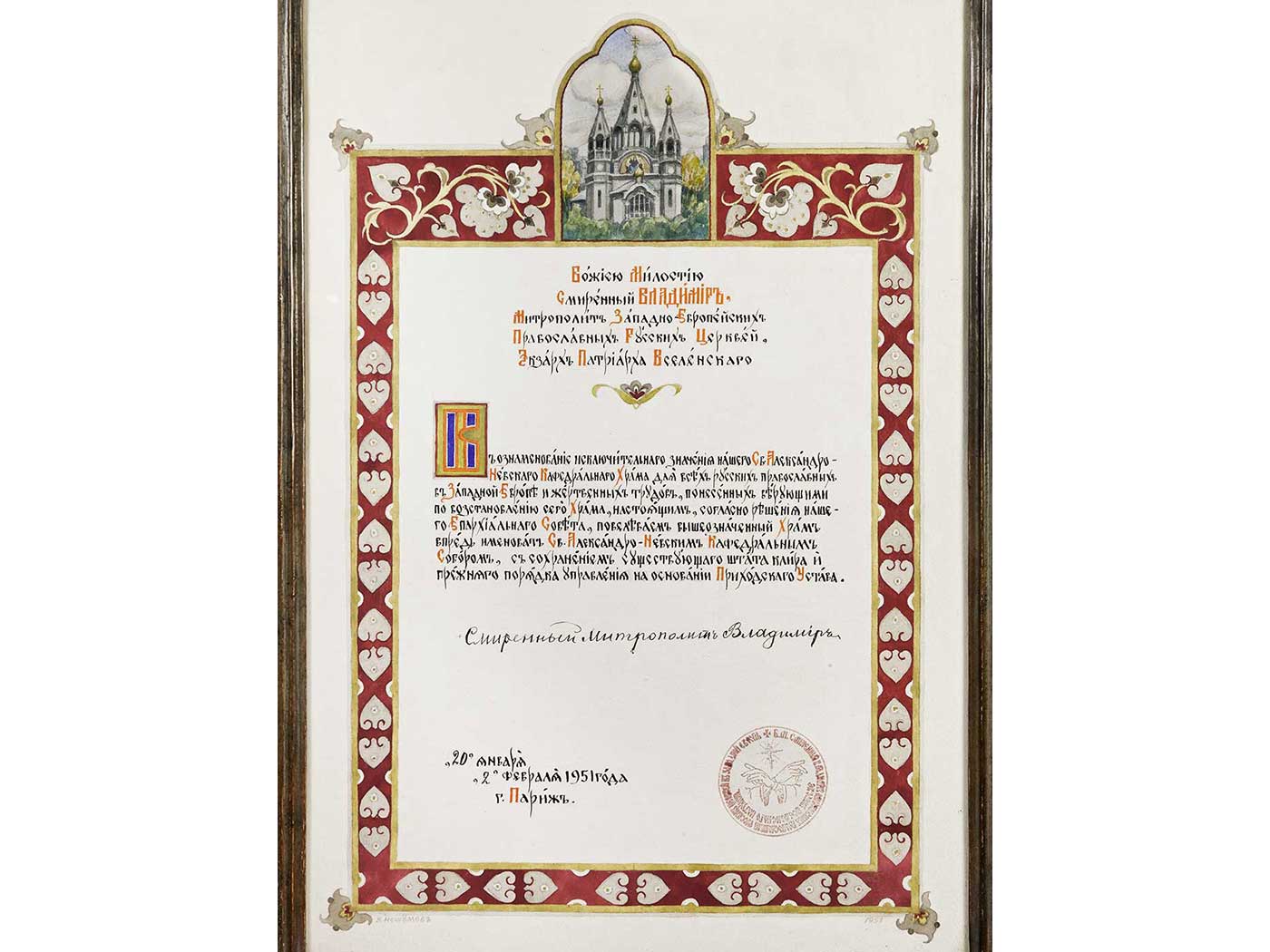 Inside view of the cathedral

Since the times of the tireless Father Joseph Vassilieff, the clergy of the Cathedral not only fulfills with abnegation and devotion its duties towards its parishioners, but also provides spiritual assistance to all those in need and visits them in hospitals or retirement homes.

The choir holds a special place in the history of the cathedral. At the beginning, it was directed by French choirmasters and supplemented, if necessary, by French singers. In 1921 the protodeacon Nicolas Tikhomiroff organized the first choir of Russian singers. Since 1925, five particularly talented choirmasters headed the choir: N.P. Afonsky (1925-1949), P.V. Spassky (1949-1968), E.I. Evetz (1968-1988), V.E. Evetz (1988-2007) and today, Protodeacon Alexandre Kedroff. Under their direction, the choir helps creating a harmonious atmosphere and embellishes the services. The Cathedral Choir gives concerts in France and abroad, has made numerous recordings and has greatly contributed to opening up Russian singing to Western Christians and lovers of religious music. Every year the Christmas and Easter services celebrated in the cathedral are broadcast by French radio.

Some icons of the cathedral

The cathedral was listed as a historical monument in 1983. In the early 90s, ancient archives were found in the crypt and were listed by historian Nicolas Ross who published a book in French on the history of the cathedral from its origins to 1917.

In a century and a half, the Cathedral has served the Russians and all the Orthodox in France and Western Europe in exemplary way. It has become a witness to the personal, family and social life of several generations of White emigres and then of other waves of emigrants from Russia and Eastern Europe; it is under the shelter of its vaults that they come together in important moments of their lives.

The Saint Alexander Nevsky Cathedral belongs to every Orthodox "Parisian" who crosses its threshold with sincerity, no matter his nationality and the length of his stay in Paris and each one is accompanied by the prayer pronounced by Bishop Leonce on the day of the consecration of the cathedral: “God! May your eyes be open night and day on this house; listen to the prayer of those who enter this place with faith”.