Since the end of the 1980s, there had been a so-called “disseminated” community in Lannion, which was visited by R.P. Pierre Tchesnakoff, occasionally celebrating in a chapel of the former Sainte-Anne convent with the few faithful living in the Trégor. With the withdrawal and then the death of Father Pierre, the need to establish a regular, organized and lasting Orthodox liturgical and catechetical presence mobilized some of the faithful of Lannion around Maurice-Jean and Nicole Monsaingeon who took the initiative to ask to HE Archbishop Serge the priestly ordination of Fr. Maxime Le Diraison, deacon of our archbishopric since 1998. With this ordination, it was during the summer of 2001 that the Orthodox parish of St. Anne in Lannion was established. by the will of Bishop Serge, and which she began to celebrate without interruption first in the Catholic Church of Fontaines, then in the Church of Saint-Roch, with the benevolence of the mayor and the parish priest of Lannion at that time. 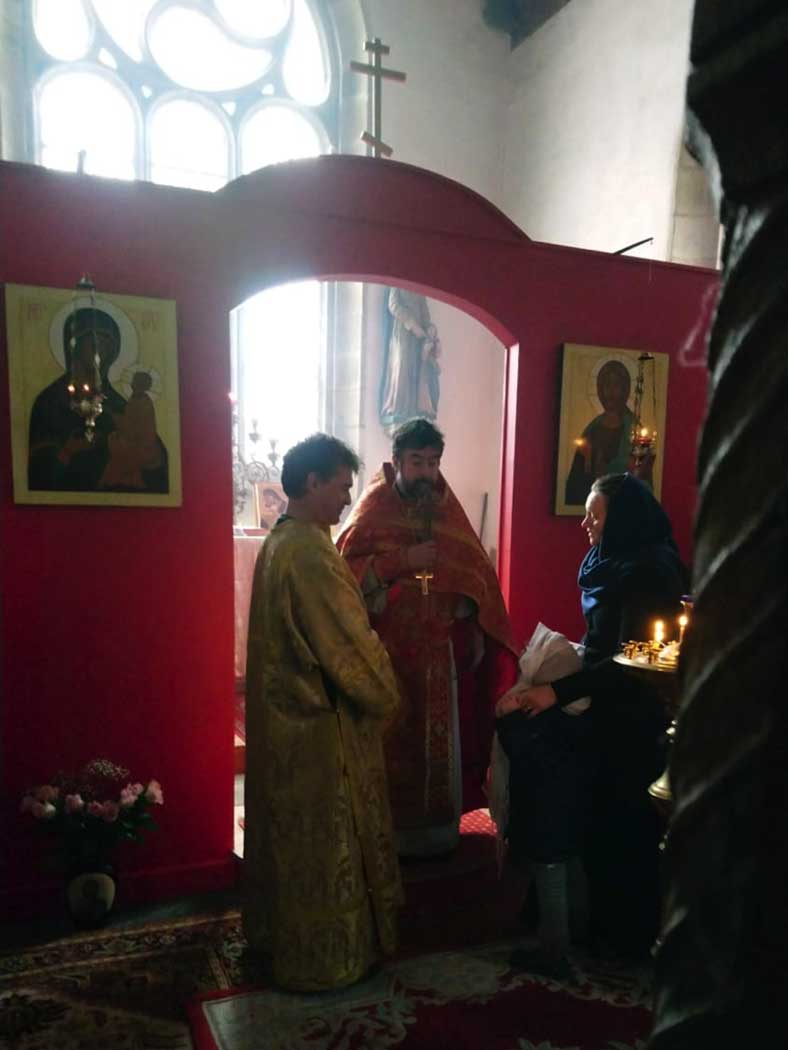 In September 2003, the Orthodox community of Lannion settled in this church, which has thus become its parish church since Archbishop Gabriel de Commane consecrated it that year. As a heritage building, this 15th-16th century church, listed as historical monuments since 1930, is a national asset. It is therefore by an agreement associating HE our late archbishop Gabriel, HE the Catholic bishop of Saint-Brieuc-Tréguier, the architect of the Buildings of France as well as the mayor and the sub-prefect of Lannion-en-Trégor , that this marvel of Breton religious heritage became our parish church. This is a large old Gothic chapel, characteristic of the golden age of Breton granite architecture from the beginning of the 16th century, but whose foundation around 1520 by Jean de Lannion, Lord of Cruguil- en-Brélévenez, undoubtedly developed an earlier establishment, since Saint Roch was invoked in the West from the fourteenth century against the plague. Among its remarkable characters, an oak choir barrier similar to Trégorrois rood screens from the same period, is surmounted by a monumental crucifixion with the Virgin and Saint John, adorned in bas-reliefs in the mass of Saint Yves de Kermartin, Saint John the Baptist , Saint Peter and Saint Paul. In addition to the sand pits adorned with medieval scenes, two large polychrome XVII statues of Saint Anne and Saint Roch flank the sanctuary, as well as two smaller ones of the Virgin and Child and Saint Margaret, which are somewhat older. Almost all of the furniture in the chapel appears to date from the first years of the 19th century, so we have added everything necessary for the celebrations according to the Orthodox typicon, as well as a beautiful red iconostasis in accordance with the specifications for buildings in France. The divine liturgies are celebrated there by Fr. Maxime every other Sunday, as well as on important feasts without counting vigils or vespers, offices of Lent and Holy Week. For several summers, the parish of St. Anne held a small catechesis camp for a dozen Orthodox children and adolescents. Its location on the outskirts of a very pretty Breton town a few kilometers from the sea, its fraternal community, its quality choir and its beautiful celebrations make it an ideal spiritual destination for the faithful and friends of the Orthodox Church of all origins.