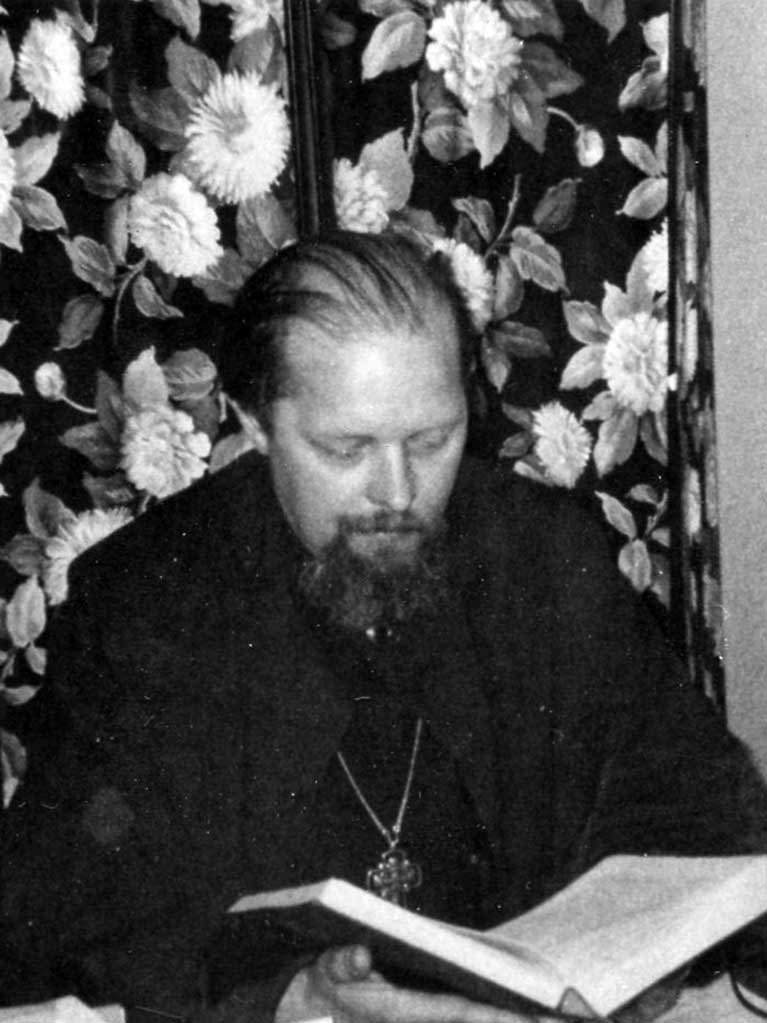 The beginning of the French community of the Crypt can be dated to 1964, when the Archbishop Georges (Tarassov), ordained Father Peter Struve (1924-1968) to be its first priest, and from that moment on the celebration of services became regular. Pieter Struve, born in 1924 into a family of Russian emigrants, was involved in the life of the Church from an early age, especially through the youth movement ACER (Action Chrétienne des Étudiants Russes). He had many friends in this movement who shared the same desire to have a place where one could worship in French. Nevertheless, the French community in the Crypt has a prehistory. Certainly, after the Second World War, from the mid-fifties onwards, there were occasional services in French at the Crypt. The person who played a key role in the change was the theologian Paul Evdokimov, who was very much in favour of a French orthodoxy. This seemed to him a necessity for all the Orthodox of Western origin and all those of Russian origin who, in increasing numbers, had lost the use of their language. Archbishop Georges, who succeeded Metropolitan Vladimir in 1960, encouraged the holding of services in French at the Crypt by allowing certain itinerant priests to celebrate more or less regularly and he saw in Pieter Struve the right person to found a French parish. After his ordination, he appointed him as the first priest to serve the altar of the Crypt dedicated to the Holy Trinity. The first celebration took place in 1964, shortly before Lent.

At the same time as he ordained Fr. Peter Struve, Archbishop Georges appointed Michael Evdokimov, Paul's son, as choirmaster for the Crypt choir. The Crypt community grew rapidly in number. The initial core was joined by people from different backgrounds attracted by the reputation of the Crypt and the aura of Fr. Peter, who had been made famous by television programmes. To integrate all these newcomers, Fr. Pieter and his wife instituted what is known as "the café", i.e. the possibility, after the liturgy, of meeting in a room made available to the community by the archbishop to have a hot drink and a chat. This custom still exists. Among the small number of faithful at the first liturgies in French at the Crypt were the future deacons and later protodeacons Georges Krjivoblotsky (+ 2007), Joseph Quemeraye and their families: two fine examples of faithful service to the community. Father Deacon Joseph still serves the Crypt with great dedication. We must also mention Hélène Aristoff, a physician by training, who later became the Crypt's psalmist until her death in July 2010. Just as the community was taking off, Fr. Pieter died accidentally on December 3, 1968. The emotion was immense, going far beyond the community. The archbishop, Mgr. Georges, was concerned not to leave this promising community orphaned. He called upon a young priest from the St. Sergius Institute, Fr. Boris Bobrinskoy (1925-2020). When he arrived, Fr. Boris found a shaken and somewhat changing community. But Fr. Boris took up the challenge and continued the work begun by Fr. Peter and, looking back, we can say that he accomplished it. Rector of the Crypt for over forty years, from 1968 to 2009, Fr. Boris was a major player in the development of the community. His reputation as a theologian and pastor attracted many people to the Crypt and to Orthodoxy. From the outset he brought his liturgical skills to the community. He taught them on many occasions, mainly in his catechesis for adults and through various publications. Despite all his other duties as a theologian and teacher, he was a loving and attentive father to the community.

In his ministry, Father Boris was very well assisted by Father René Dorenlot, a physician ordained deacon for the Crypt by Mgr. Georges in May 1973 and then priest in April 1978, always available and close to the faithful. Father René also served for a time as rector of the parish of the church of St Serge of Radonej, in Colombelles, near Caen (Normandy).

As the number of faithful increased, and above all to maintain the link between all those who, for various reasons, could not be present while remaining attached to the Community, it was decided to launch a bulletin. The first issue was released in September 1971. Initially monthly, the Bulletin de la Crypte has continued to be published ever since and is now quarterly. On February 15 1973, by Archbishop's decision, the French Orthodox Community of the Holy Trinity was erected to the rank of parish.

In 1999 Father Alexis Struve, son of Father Peter, was ordained for the Crypt by Archbishop Serge and was appointed its rector on Father Boris' retirement in 2009 until his professional transfer to Ukraine in the summer of 2014. Father Elisée (Germain), of Russian origin through his mother, tonsured a monk in 1998 at St Silouane Monastery, after theological studies at the St Serge Institute, served at the Crypt immediately after his ordination by Archbishop Gabriel in 2005 and since August 1, 2014 he has been its rector. In December 2014, the fiftieth anniversary of the community was the subject of a special issue of the Bulletin (No. 428) with many testimonies. The ordination of the rector of the parish, Father Elisée, as vicar bishop for the God-guarded city of Reutov, took place on Sunday June 28, 2020 in the Cathedral of St. Alexander Nevsky to the great joy of the faithful.

In more than 50 years of existence, the French parish of the Holy Trinity has obviously changed in its composition. Among the French Orthodox parishes of Paris, the Crypt is one of the most important in terms of number of faithful. Its location in Paris and its link with the cathedral make it a privileged place to meet and visit. The community has evolved since the beginning. It has become more French-speaking and has an increasing proportion of converts. The participation of people of Russian origin, who at the beginning contributed a lot to the development of this community, has tended to diminish, while on the other hand the presence of Orthodox from very varied countries, Eastern Europe of course, but also the Near East and Black Africa, among others, is becoming more and more important. As a result, the Crypt retains a very marked multi-ethnic character.