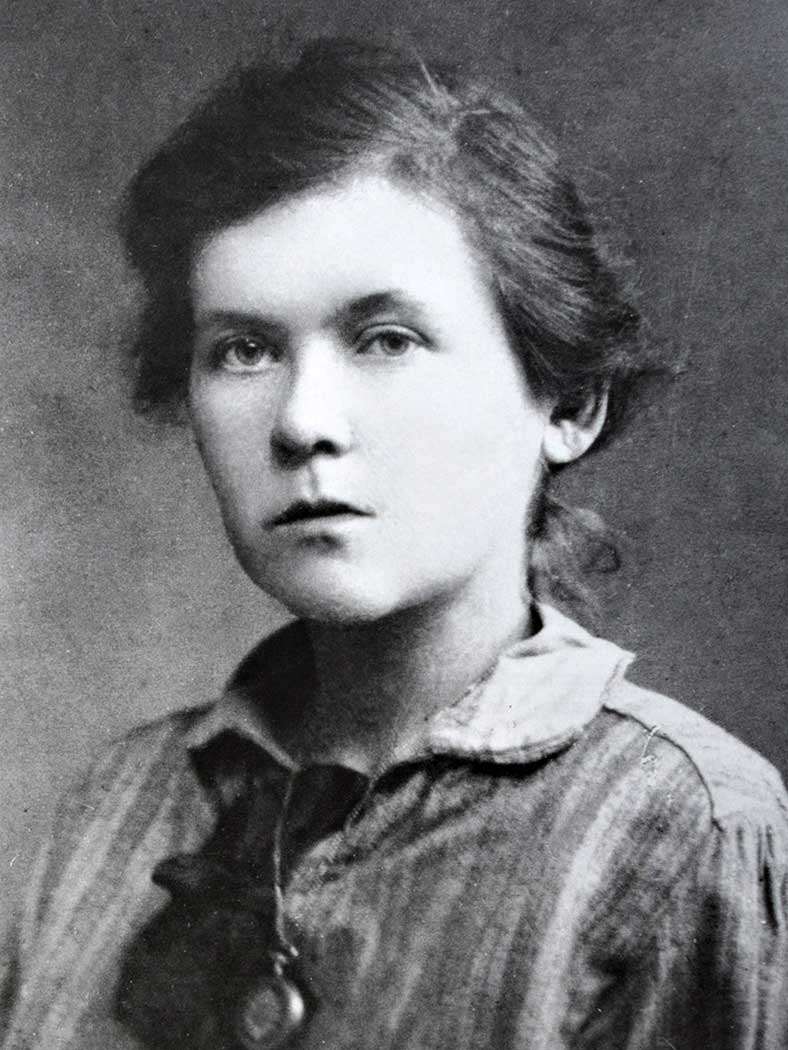 Sister Jeanne (Julia Reitlinger) is born on April 28, 1898, in Saint Petersburg, daughter of Nikolai and Lidia Reitlinger, and granddaughter of the Generals A.I. Reitlinger on her father’s side, and N.S. Ganetsky on her mother’s side. Julia spends her childhood in Saint Petersburg. During the vacations she goes to Finland where she makes her first water-colour paintings of landscapes. In 1915 she finishes the private gymnasium of Princess A.A. Obolenskaya and she enters the 4th class of the Drawing Academy of the Imperial Society for the Encouragement of Fine Arts (Императорское общество поощрения художеств).

In the summer of 1917 the sisters Reitlinger leave for the Crimea, where their parents join hem. In 1918, Julia N. Reitlinger meets there her future spiritual father, Sergius Bulgakov, whom she will accompany until his death in 1944. During this period she also meets the young artists Elena P. Gertik and Lydia A. Nikanorova. In 1919-1921 she studies in Simferopol at the Faculty of History and Philology of the Universsity of the Crimea. During these years her mother and two sisters die from typhus.

In 1921 Julia travels with her sister Catherine to Poland and settles in Warsaw where she teaches private courses and frequents courses at a studio for drawing.

In June 1922, she settles in Prague and receives accomodation from the family of Professor P.B. Struve. Between 1922 and 1924 she studies at Charles University in Prague. This city was during the years 1920 one of the most important cultural and intellectual centers of the Russian emigration. Julia visits circles of Orthodox christians, in particular the « Philosophical and Religious Society », where she again encounters in 1923 Fr. Sergius Bulgakov. In October of the same year, in Psherov, she participates in the first Congress of the Christian organizations of Russian youth in Europe, which marked the beginning of the organization « Action chrétienne des Étudiants Russes » (ACER).

The period in Prague marks a real turning point in the spiritual and artistic life of the young painter. In this period Julia Reitlinger is initiated in the technical skill of icon painting by Cyrill Matkov, a young man, son of professsor Matkov who himself had received this skill from the Old Believers in the region of Pskov. In 1924 she paints her first icon, the Head of Saint John the Baptist, made after a sketch which represents Father Sergius sleeping.

In 1925, Father Sergius Bulgakov becomes professor of Dogmatic Theology of the newly founded Saint Sergius Orthodox Theological Institute in Paris. Julia Reitlinger, too, moves to Paris to be near her spiritual father, and settles on the hill of Saint Sergius.With the blesssing of Fr Sergius she continues her research in the domain of religious painting. At this time, she feels already an interior contradiction which will determine her future artistic creativity : she is fascinated by the ancient Byzantine and Russian iconography, it is true, but her sense of artistic freedom does not allow her to accept the fixed iconological formulas and principles.

In Paris she frequents the milieu of Roman Catholic artists and follows the courses at the « Ateliers d’art sacré ». Though she maintains good relations with certain professors and more particularly with Maurice Denis, the founder of the school, Julia Reitlinger is not satisfied with the education received at this school: she rejects the vision of the religious image proposed by her Roman Catholic friends, which she finds being too remote from the Orthodox Tradition.

In 1927 she goes to Munich to see the itinerant exposition of icons of the XII-XVII centuries which recently had been discovered in Russia. As a young painter she is profoundly impressed by this direct contact with these ancient icons, so numerous and diverse, as well as by their contemporary copies, being brought together in one place at the museum.

In 1928 she becomes a member of the Association « Icon » which brings together artists, architects, collectors and historians of church art, almost all of them being Orthodox. There she takes courses on icons with Pimen M. Sofronov, a master iconographer and Old Believer who came from Riga. These courses have been for her of an inestimable value.

In the beginning of the years 1930 she gives on a regular basis expositions of her icons together with those of other members of the Association. Her free style to paint the holy images, applying elements of modern art has not escaped the attention of journalists and critics of art who were amazed by her works. At this period she already manifests a particular preference for complex compositions with illustrative features.

Between 1931 and 1932, with the help of her sister Ekaterina, she paints her first monumental work, the iconostasis and wall panels for the church of Saint John the Warrior in Meudon.

On September 11, 1935, Julia Reitlinger takes her monastic vows in the church of Saint Sergius in Paris and receives the name Jeanne. In monastic life Sister Jeanne finds a spiritual and emotional stability, which is especially noticeable in her many artistic works of this period. Among her works stand out a triptych for the Anglican chapel of the Merrifield College in England, the iconostasis and icons for the church of the Protection of the Mother of God , next to the foyer for single young women, organized by Saint Mary (Skobtzov) in the XVe district of Paris, a pannel representing Adam and Eve in Paradise for the church of the Presentation of the Mother of God in the Temple in Paris (1937), as well as the iconostasis and the icons of the church of the Skite of the Icon of Our Lady of Kazan in Moisenay (1938). Sister Jeanne makes also many illustrations for books for children.

Shortly after the death of Father Sergius Bulgakov Sister Jeanne lives with her sister in Prague, then she leaves for England to make her last monumental work in Western Europe, the frescos of the church of Saint Basil the Great in the house of the fellowship Saint Alban and Saint Sergius in London.

In 1949 Sister Jeanne moves to Slovakia. Because of the polical problems which the Church has to face in that country, Sister Jeanne withdraws little by little from church life and abandons icon painting.

In 1955 she returns to Soviet Russia with her sister Ekaaterina and settles in Tashkent. She obtains a post as teacher of drawing and earns her living by decorating scarfs and shawls. In the beginning of the years 1970, she meets Father Aleander Men who becomes her spiritual father, and thanks to him she starts again painting icons. During the last years of her life, she is unable to paint due to deafness and blindness.

Exhibition of mural paintings by Sister Jeanne Reitlinger from 1997, part 1

Exhibition of mural paintings by Sister Jeanne Reitlinger from 1997, part 2

Several frescoes made by Sister Jeanne Reitliner are reproduced on the site of the Saint Ann parish in Northampton.