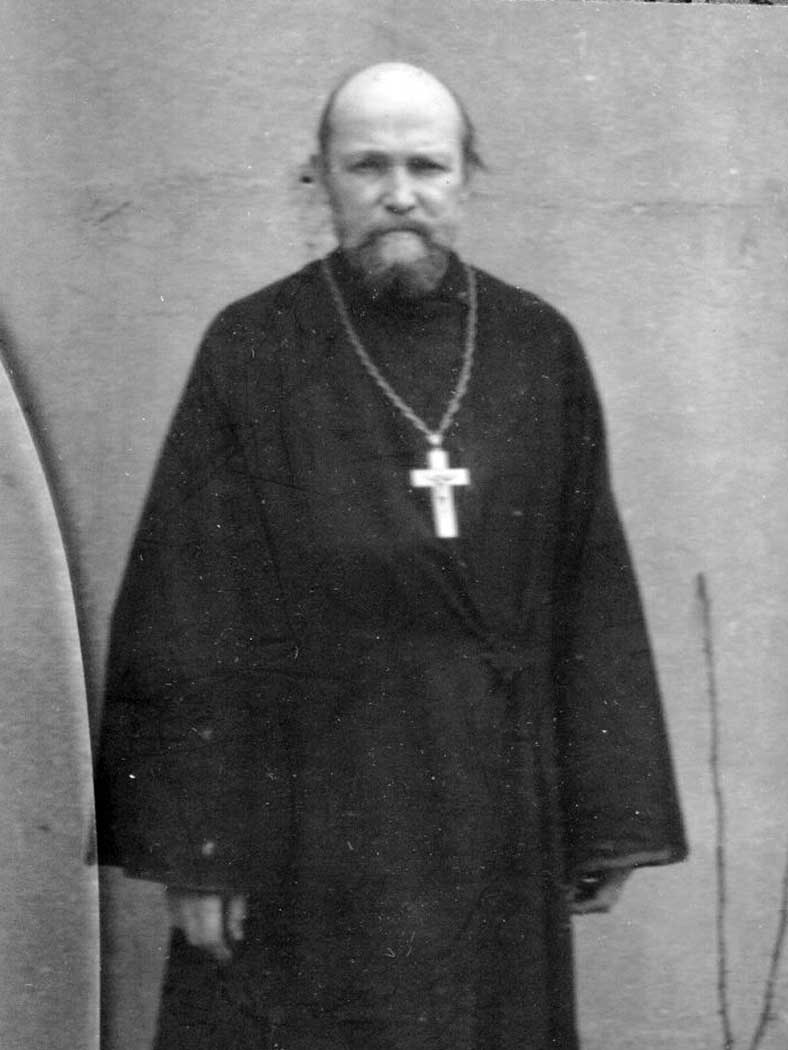 Church service was the very foundation of Father Victor's life.

He had started by putting himself at the service of the Fatherland, then this service was developed, had risen to become the service of the Church. Victor Andreevich Yourieff was born on September 4, 1893 in Vladimir-Volynski. Having completed his studies at the Saint-Michel Artillery School in 1913, Victor Andreevich had participated in two wars: the First World War and the Civil War. He had commanded, with the rank of colonel, the armored train of the 6th Division and had received the order of St. Vladimir for his exceptional performance on the battlefield. His colleagues held him in great esteem, bowing to his great courage, wisdom and vigor of his faith.

In 1920, Victor Andreevich Yourieff was evacuated with the White Army to Gallipoli in Turkey where he had lived two years before coming to France. He first worked in a factory in Le Creusot, then in a metallurgical plant in Knutange where there was a poor but well organized Russian church. This church had close ties to ACER, sending delegates to congresses and bringing in speakers. The parish council had awarded a scholarship to Victor Andreevich to study at the Saint Serge Theological Institute, which he had completed in 1933. In 1931 he had married Inna Konstantinovna Krayevich (1884-1962). In April 1932, he was ordained a priest at the Saint-Alexandre-Nevsky cathedral in Paris. He had served at the Church of the Theological Institute of Saint Serge until the end of his studies. As early as 1933 he had been appointed rector of the Chapel of the Union of Elders of Gallipoli.

When serious political events did not allow Father Serge Tchetverikov to return to his flock in Paris, it was Father Victor, an active member of the Movement, who had been appointed rector of the Church of the Presentation at the Temple of the Most Holy Mother of God on July 1, 1937 and he remained so until her death in 1966.

During the war, ACER's work had been banned, and all activity of its members was focused on the church itself. Father Victor had organized the life of the church according to the principles established and left by Father Serge Tchetverikov, the services were celebrated every day with a liturgy and an evening service, celebrated the day before. Inna Konstantinovna had taken over the management of the Thursday School, a school which had accommodated fifty, eighty and some years up to ninety-five students.

The situation of Russian emigrants was particularly tough during World War II and the Occupation. Father Victor was then in close contact with social welfare organizations, in particular with the "Help Office" headed by Sophie Mikhailovna Zernov, who fought tirelessly with the authorities for the defense of Russians and especially children.

It was in the spring of 1942 that the ordination of V. V. Zenkovsky took place, followed by his appointment as vicar of Father Victor in the Church of the Presentation. The common service that Father Victor and Father Basil gave together before the altar of God was marked by the deep respect and love they had for one another. This period in the life of the parish had been very intense and happy.

Father Victor was full of zeal for prayer and prayed a lot for his parishioners, especially for the sick and the deceased. He was keen to come and bless the homes of parishioners on the occasion of the feast of Theophany. He visited the sick and always tried to help them. He lived with his matushka in the pavilion near the entrance, their door was always open for the destitute, both Russian and French. He listened to everyone and gave what he could, although he had very little money. Father Victor was very angry when one of the parishioners tried to prevent these poor people from visiting him.

In 1948, the church numbered around four hundred parishioners, of whom only two hundred paid dues. In 1947 and 1948, Father Victor celebrated with Father Basil Zenkovsky, the recently ordained Father Alexis Kniazeff and Archpriest George Florovsky. Like Father Serge Tchetverikov, Father Victor had taken part in all forms of ACER activity. As early as 1932 he had participated in children's holiday camps, he had been chaplain of the boys' camp in La Napoule then in Saint-Césaire and Saint-Theoffrey - his pastoral activity seemed to have no limits.

However, Father Victor also had other administrative responsibilities, he had been for twenty years a member of the Diocesan Council of the Russian Exarchate, which he had chaired for five years. From 1951 to 1966, he headed the Diocesan Education Committee and was appointed dean of parishes in the Paris region (1952-1960). And of course he was a member of the Gallipoli Veterans Union. Father Victor accepted these responsibilities with all his heart and worked in all obedience to his bishop with his own sense of duty and responsibility. In church, in addition to Father Basile Zenkovsky, he had been assisted by Father Alexis Kniazeff, Father Georges Sérikoff (second vicar from 1941 to 1943) and Father Igor Vernik, appointed in 1959 permanent vicar of the rector.

In December 1964, the whole parish celebrated the 25th anniversary of Father Victor's presence as rector of the Church of the Presentation. On this occasion, she underlined her spirit of sacrifice, her total acceptance of the divine will, her demanding love but full of solicitude for all the parishioners and all her spiritual children.

Protopresbyter Victor Yourieff died on August 6, 1966 at the age of seventy-three. He had fully confirmed with all his life what Metropolitan Euloge (Gueorguievsky) had written about him in his notes, published in 1947: "He is an admirable priest!" "