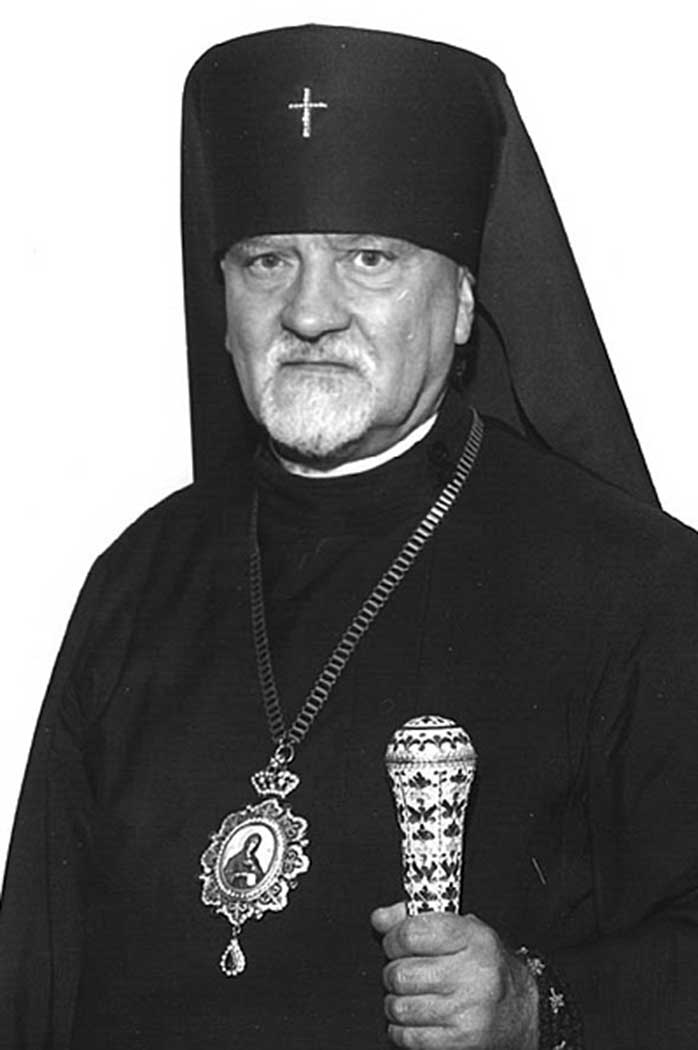 From 1952 to 1962, Archbishop Sylvestre (Harun) was Vicar Bishop of the Archdiocese with the title “Messinian”. Born October 19 (November 1, 1914) in the city of Dvinsk (now Daugavpils, Latvia). He received his primary education at the Russian First Basic School in Daugavpils, then studied at the Russian State High School in Daugavpils. During his school years, he began serving in the altar of the local Alexander Nevsky Church, whose rector, Archpriest Mikhail Peterson, organized a "children's corner" at the church, which became popular among the Russian city environment.

In the fall of 1929, members of the Daugavpils branch of the Russian Orthodox Student Unit, which was an independent branch of the RSHD in Latvia, participated in the work of the Children's Corner.

Inspired by their example, Ivan decides to devote his life to the service of the Church and decides to go to France to enter the Saint-Serge Theological Institute in Paris, where he goes at the end of 1934.

Even before his departure for Paris in early 1934, he became a representative and distributor of Vestnik RSHD magazine in Daugavpils. In addition to this magazine, members of the Russian Orthodox Student Unit received the latest books from the YMCA-Press publishing house, exchanged them and distributed them to all the cities where the RFEU had branches. He remained an active member of RSHD until the end of his life.

In June 1935, as a student at the Institut Saint-Serge, he participated in the congress of the Council of the RSHD in France. During his student years, he began to write articles for the journal "Way of Life".

The same year he graduated from the Institut theologique Saint-Serge in Paris with the diploma of candidate in theology of the 1st category, after which he was sent to serve in the Church of the Resurrection in the city of Belfort in the east of France, on November 19 of the same year, he was appointed rector.

With the outbreak of World War II, Hieromonk Sylvestre treated Orthodox soldiers in the French armed forces located in this region.

From the moment when German troops attacked the USSR in 1941, camps for Russian prisoners of war appeared on the territory of France and the Channel Islands, and Hieromonk Sylvestre, having received official authorization from the secular authorities and the blessing of Metropolitan Euloge, left the parish of Belfort and began to feed the prisoners, while raising funds to help them through the parish of the RSHD - the Temple of Entry into the Temple of the Most Sainte Théotokos in Paris.

In 1944-1945, he was parish priest of prisons and hospitals in the arrondissement of Paris. On March 11, 1945, he was appointed to the guard of the Painful Church on rue de la Tour in Paris. There he developed an extensive educational program for young people and the parish became known for its Thursday parish school.

In the early postwar years, Hieromonk Sylvestre, along with American services and others, provided assistance to Russians who found themselves in foreign lands and left France. He tried by all means to prevent the repatriation of the Russians.

He headed the Missionary Department of the Exarchate of Orthodox parishes of Russian tradition in Western Europe and the Relief Society of Immigrants, being at the same time the editor, with Alexander Schmemann, of the Bulletin of the Eparchy.

On April 27, 1952, in the Saint-Serge de Radonège church in Paris, he was ordained bishop of Messina, vicar of the Western European exarchate of Russian Orthodox parishes. The consecration was made by Metropolitan Vladimir (Tikhonitsky) and his vicar Bishop Cassien (Bezobrazov). Initially, he remained in Paris as Metropolitan Vladimir's assistant for missionary and editorial affairs.

On April 24, 1956, he became rector of Saint-Nicolas Cathedral in Nice with the mission of supervising the parishes of southern France and Italy. On May 21, 1957, he led the divine services during the consecration of the upper church of the Church of St. Nicholas in Bari. From 1957 to 1962 he was rector of the Cathedral of Christ the Savior in San Remo. He continued to take care of young people in pastoral care, he was even called “Bishop of all young people”.

Bishop Sylvestre has been invited to serve in North America since the late 1950s. On October 10, 1962, the Synod of Bishops of the Russian metropolis in North America asked him to become the reigning bishop of the Canadian diocese, based in Montreal.

On January 24, 1963, the council of professors of the Institut théologique Saint-Serge proposed that he be appointed administrator of the Saint-Serge enclosure in Paris in order to prevent his departure for Canada, but this project did not have place, and on April 18, 1963, he took charge of the Headquarters of Montreal, joining the North American metropolis.

From July 10, 1963 to 1979, he was president of the RSHD. He took a large part in his publishing projects, notably in the periodical edition of Vestnik, being a member of its editorial board and representative in Canada.

In 1966, he was elevated to the rank of archbishop. From that time until 1972 he was Acting Governor of the Diocese of New England.

On May 15, 1974, he was appointed temporary administrator of the Orthodox Church of America to help the ailing Metropolitan of New York Irenaeus (Bekish). He was president of the Fourth Pan American Council of the Orthodox Church in America, which was held from November 10 to 13, 1975. He also chaired the Fifth Pan American Council of the OCA, which was held from November 25 to 28. October 1977, in which Metropolitan Theodosius (Lazor) was elected the new head of the OCA on October 25, 1977, in which Archbishop Sylvestre resigned his post as temporary governor of the OCA, but became vice-president of his Holy Synod.

On July 1, 1981, he retired, after which he devoted his forces to serving at Peter and Paul Cathedral in Montreal and at Seraphim House Church in Rovdon, Quebec, where he had a country house.

With age, the great excitement of Montreal began to weigh down. Leaving the post of rector of Pierre and Paul Cathedral in Montreal, he settled permanently in his residence in Rovdon.

When weakness and sickness deprived him of the opportunity to perform divine service in the last years of his life, he endured it very hard. Collected and received the Holy Gifts two days before his death. On May 18, 2000, he passed away peacefully after a long illness.

On May 23, at Pierre-et-Paul Cathedral in Montreal, Bishop Seraphim of Ottawa and Canada (Storheim) celebrated his funeral. Burial followed at Serafimovskoye Cemetery in Rovdon, which he himself decorated and enlarged.