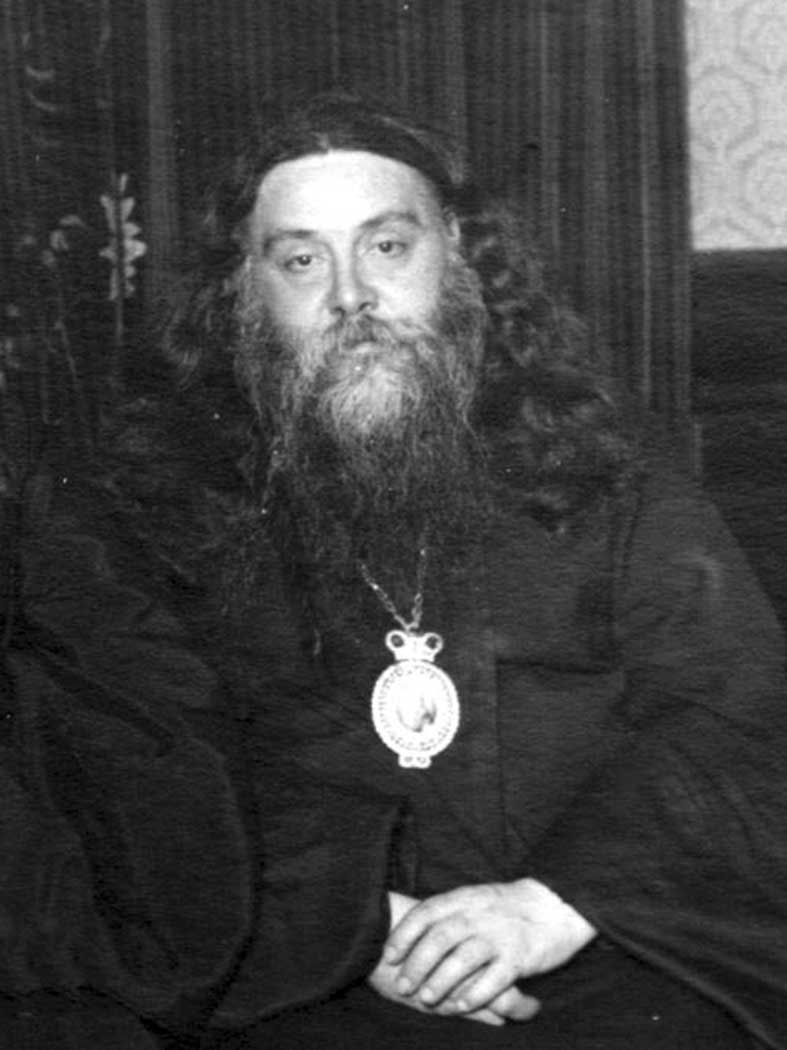 Archbishop Serge, in civil Arkady Dimitrievich Korolev, was born on January 18, 1881 in Moscow into a merchant family. He did not remember his father who died when Arkady was three months old. He spent his childhood with his mother in a village near the Vlakhernsky monastery of the Dmitrov district, Moscow province. There he studied at a rural school, took part in fieldwork. After graduating from primary school, his mother took him to a religious school in the city of Dmitrov, since there was no other secondary school in the city. In view of his good results, Arkady Korolev, after graduating from college, was admitted to the Bethany Seminary near the Trinity Saint Serge Lavra. After graduation, he entered the Moscow Theological Academy. In 1905, Arkady Korolev graduated from the Academy, but did not intend to be ordained, thinking of becoming a seminary teacher. But the Lord decided otherwise. One of Arkady's acquaintances invited him to stay at the Yablochinsky monastery of the Kholmsk diocese. There he was introduced to Bishop Euloge of Kholmsk (Gueorgievsky) and, under his influence, decided to embark on the monastic path. On June 7, 1907, Arkady Korolev was tonsured into monasticism with the name Serge and in 1908 was ordained hieromonk by Bishop Euloge.

The Yablochinsky monastery then carried out a great missionary work among the population who had recently returned from Uniatism to Orthodoxy. A school of psalmists and an agricultural school were established at the monastery. In addition, in the monastery they collected old church melodies from different churches and distributed them to parishes through their pupils-psalmists. There were cases that the inhabitants of the Carpathian Rus crossed the border of Austria-Hungary in order to receive an initial spiritual education in the monastery. The worthy were ordained to priesthood and returned to their homeland as trained defenders of Orthodoxy. The young hieromonk Serge took an ardent part in all this. He was interested in the peculiarities of the local spiritual life, processions, singing of folk spiritual songs and so on. In 1914, Father Serge was elevated to the rank of archimandrite and was appointed hegoumen of the monastery. But the next year, due to the approaching military front, the monastery had to be evacuated to the inner provinces.

Only in 1920 did Archimandrite Serge return to Yablochnoye, which by then was within the newly formed Polish Republic. The monastery was destroyed and everything had to be rebuilt. In 1921, a decree was received from His Holiness Patriarch Tikhon on the elevation of Archimandrite Serge to the rank of Bishop of Belsk, vicary bishop of the Kholm diocese. The ordination took place on April 17, 1921 in the city of Vilna and was headed by Archbishop George of Warsaw (Yaroshevsky). As the Kholmsk see was vacant, the new bishop was entrusted with the temporary administration of the diocese, and the Orthodox population of the Kholmsk region was glad that it had its own bishop again. The Polish government of Pilsudski looked differently. In 1922, Bishop Serge was arrested for resisting the proclamation of autocephaly of the Polish Orthodox Church, was under house arrest in the Suprasl monastery and finally expelled from the borders of the Polish Republic. The Polish authorities asked for which country he wanted to leave, but Bishop Serge did not give an answer, leaving his fate entirely to God's will, and was taken to the border of Czechoslovakia.

As he was informed that there is an Orthodox church in Prague, Vladyka drove to the capital of the republic. In the church of St. Nicholas in the old city of Prague, Orthodox services were held again after the war, but there was no specific priest assigned. Vladyka Euloge, who was then Metropolitan of the Western European Orthodox Russian Churches in Paris, appointed him vicary bishop and rector of the Church of St. Nicholas in Prague. In this position, Bishop Serge lived in Prague for 24 years.

Vladyka occupied a small room in Prague in which he received numerous visitors. There were metropolitans and bishops, simple, even illiterate people who were devoted to him with all their hearts. Here he also sheltered the expelled from Poland, like him, Archbishop Vladimir (Tikhonicky). On Thursdays, people of different levels of education, social status and age gathered in this room. Vladyka himself would offer tea and jam, and for everyone he would found a word of affection, consolation, guidance and spiritual support. Vladyka was valued and respected not only by Russians, but also by many Czechs, sometimes even by non-believers. The bishop knew well his flock, character, position and family environment of each one. Visiting his parishioner’s houses, he would give advice on spiritual or everyday life matters. On Saints days and family holidays, Bishop Serge himself came and held prayer services. As a confessor, Vladyka acquired many spiritual children, some of whom, having left Prague, continued to keep in touch with him and numerous letters came to him from all over the world, . In these letters his spiritual children opening their souls, would ask for advice, spiritual guidance and prayers. For a long time, Bishop Serge was the only clergyman in the church, performing all the services, baptism, weddings, funerals, visiting hospitals and bringing Holly Communion to the sick. Only in 1929 was hieromonk Isaac (Vinogradov, 1895-1981) sent to help him. Fr Isaac became his closest assistant and friend. In addition to Prague, Bishop Serge was in charge of the Orthodox communities in Brno and Bratislava. He was also entrusted with the supervision of the spa churches in Karlovy Vary, Marianske and Frantiskovy Lazne, where services were held only in the summer season. The visit by the bishop of the Orthodox communities has always been a feast. Every parishioner wanted to receive such a dear guest.

In 1924, Metropolitan Euloge appoints Bishop Serge as his vicar for the Czech parishes and in 1937 he was intrusted the parishes of the Exarchate in Germany. In 1940, he became the administrator of the parishes of Belgium, the Netherlands, Scandinavia, Germany and Czechoslovakia with the power of a diocesan bishop.

Through the efforts of Bishop Serge in 1924-1925, the Russian of Prague built the Assumption Church at the Olshansky cemetery. At one time, this temple was provided for worship to the Bishop of Prague Gorazd (now Hieromartyr Gorazd, Comm. 22 August), when he did not yet have his own church in Prague. In the forties, the Assumption Church was painted with frescoes according to the sketches of the artist Bilibin. Thanks to the authority of Vladyka, it was possible to raise significant funds for this matter.

Not far from the church of St. Nicholas, in old Prague, an apartment was rented. After the services, parishioners gathered there to meet with the clergy. In the evenings, Bishop Serge read akathist hymns and conducted spiritual conversations, explaining that fulfilling the commandments of Christ not only opens us the way to salvation, but here, on earth, makes our life joyful and cheerful. Several times Bishop Serge travelled abroad: to France, Germany and Italy. Once Vladyka undertook a trip to Sweden and Finland. On each trip, he acquired new acquaintances and connections, expanding the circle of his spiritual care.

After the end of the Second World War, all Orthodox communities on the territory of Czechoslovakia, both under the jurisdiction of Metropolitan Euloge and the Czech Diocese of the Serbian Orthodox Church, were incorporated to the Moscow Patriarchate.

In 1946, Bishop Serge was appointed Archbishop of Vienna, Exarch of the Moscow Patriarch and in 1948, Archbishop of Berlin and Germany. In 1950, Vladyka Serge was transferred to the Kazan and Chistopol cathedra.

Archbishop Serge spent two years and two months in Kazan. The Kazan head of the Council for the Affairs of the Russian Orthodox Church, Klochkov, reported: “Archbishop Serge did not hold any special events, but he introduced a daily service in Kazan city churches. He visits them daily and often serves himself. By this, he achieved the fact that the number of believers began to go to church, and raised his authority. "

Vladyka instructed and nourished his new flock, caring for tit like a loving father, visiting large families, helping the poor with food and money, praying for the sick.

The 1950s were a time of continued persecution of the Orthodox Church, but Archbishop Serge was not afraid of persecution. As in Prague, he often would go out into the streets with a sack on his shoulders and, like St. John of Shanghai, helped all those in need who met him on the way, materially or spiritually - with his fervent prayer. In 1952, the his health deteriorated greatly. He managed to see his spiritual brother, Archimandrite Isaac (Vinogradov), and, seeing his imminent death, bequeathed his black mantle to him. Archbishop Serge passed on December 18, 1952, on the feast day of St. Sabbas the Sanctified. Exactly on the same day, 7 years later, his friend and brother in the episcopal ministry, Metropolitan Vladimir (Tikhonicky), will leave for a better world.

After the death of the Archpastor, only a worn cassock, a pair of old boots, liturgical and spiritual books and a samovar remained.

During his two years in Kazan, Archbishop Serge was able to acquire love for himself, to bring up many spiritual children and disciples - monks, priests, and laity. To this day, the memory of him is carefully preserved among the people. In sorrow, people go for consolation to the grave of their Archpastor, and many miracles happen through his prayers already from the Heavenly World. At present, materials are being prepared for the canonization of Archbishop Serge of blessed memory.