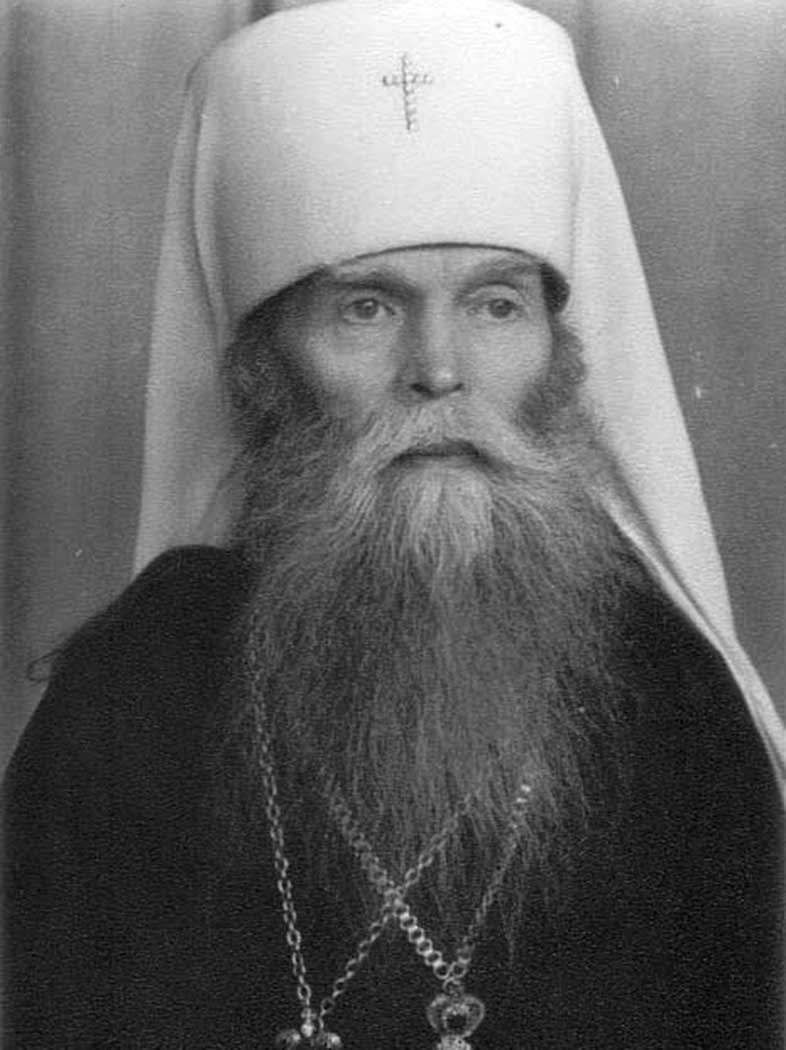 Metropolitan Vladimir (Viatcheslav Tikhonitski) is remebered as a very saintly hierarch, filled with simplicity and meekness (in accordance with his family name, the Russian word тихо meaning meek, calm), a man of prayer, faithful in all things to the Word of God. During thirteen years he has directed the Exarchate of the Ecumenical Patriarchate for the Russian parishes in Western Europe which much abnegation. He continued the work which his predecessor, Metropolitan Eulogy, has started, remaining faithful to the Russian Tradition, which he himself fully incarnated, while at the same time being conscient of the necessity to organize a true local Church and to celebrate, if needed, in the Western languages.

Metropolitan Vladimir is born on March 22 of the year 1873 in a small village near Orlov, in the province Viatka, in Russia. At his Baptism he was given the name Viatcheslav. He belonged to an old priestly family : his father, Archpriest Michael Tikhonicky, was killed in 1918 by the Bolshevists (in 2003 he was canonized by the Russian Orthodox Church) ; later on one of his brothers, Benjamin, also became Bishop in Russia and died as Archbishop of Kirov (in Viatka) in 1957.

After his studies at the diocesan Seminary of Viatka, Viatcheslav entered the theological Academy of Kazan (1893-1998) which put a particular emphasis on missionary work. During these years of study, under the influence of the strong personality of the then Rector, Bishop Anthony (Khrapovitsky), he took his monastic vows and received the name Vladimir (in 1897). The following year he is ordained hieromonk and is sent as a missionary to Kirghizia. In 1901 he is appointed by the Holy Synod of the Russian Church director of the Orthodox mission of Kirghizia and elevated to the rank of Archimandrite.

Having been sent to the diocese of Omsk (Siberia) to assist the Bishop of that diocese, and later to the monastery of Suprasl, at the frontier between Belorussia and Poland, which at the time were part of the Russian Empire, he is elected by the Holy Synod Bishop of Bialystok, and auxiliary of the diocese of Grodno. His episcopal ordination took place at the Lavra of Saint Alexander Nevsky in Saint Petersburg, on June 3, 1907, under the presidence of Metropolitan Anthony (Vadkovsky). During the years 1910-1913 he is frequently asked to replace Archbishop Eulogy in the diocese of Kholm, who often had to stay in Saint Petersburg because of his obligations as a deputy of the Duma.

After the evacuation of the diocese of Grodno during the military attack by the Germans in 1914, Bishop Vladimir found himself in Moscow, at the Monastery of the Miracle of Saint Michael, at the center of the Kreml. In the beginning of March 1917, just after the abdication of Tsar Nicholas II, he accompanies Archbishop (later Patriarch) Tikhon (Bielavin) to Kolomenskoe, the ancient residence of the Tsars near Moscow, where just had been discovered (a significant sign !), the miraculous icon of Our Sovereign Lady, and he participates in the first liturgical service before this precious relic.

As a member of the Council of the Russian Church in Moscow (1917-1918), representing the diocese of Grodno, he participates in the three sessions of the Council. In the autumn of 1918 he returns to Bialystok which had become part of the recently proclaimed Republic of Poland. He is charged by Patriarch Tikhon to direct, with the prerogatives of diocesan Bishop, the parishes of the region of Bialystok, which were now cut off from the rest of the diocese of Grodno. In 1923 he is elevated to the rank of Archbishop by the Patriarch. The same year, having expressed his disagreement with the attempts of Metropolitan Dionysius of Warsaw to obtain the autocephaly of the Orthodox Church in Poland, Archbishop Vladimir is arrested by the civil authorities of Poland and forced to stay at a monastery during one year, after which he was expelled to Czechoslovakia. In Prague he meets Metropolitan Eulogy again, who is during three years already heading the Russian Orthodox Churches in Western Europe and proposes him to become his auxiliary in France for the parishes at the Côte d’Azur (Nice, Menton, Cannes, Toulon).

In February 1925 Archbishop Vladimir settles in Nice where he becomes the Rector of the Cathedral of Saint Nicholas together with the parishes which are attached to it. During twenty years he is able to lead the life of meditation and prayer which he has been longing for all his life. In 1930 he supports the position of Metropolitan Eulogy when the latter was threatened by the Patriarchate of Moscow to be dismissed from all his functions, because he was suspected of taking a political stance when he participated in a ecumenical prayer service for the persecuted Christians in Russia. The locum tenens of the Patriarchal Throne in Moscow, Metropolitan Sergius of Nizhny Novgorod, had openly denied the existence of such persecutions. Vladyka Vladimir refused to accept the decree of Metropolitan Sergius which entrusted to him the administration of the diocese in the place of Metropolitan Eulogy. He reaffirms again his support to Vladyka Eulogy when the latter went to Constantinople in order to make an appeal to the Patriarch of Constantinople. As a result, the Patriarch received his diocese into his jurisdiction together with all its parishes. During the Second World War the communications between Vladyka Eulogy and the diocesan Administration had been cut off because of the line of demarcation. As a result Vladyka Vladimir obtained the right to administer, with the prerogatves of diocesan Bishop, the parishes of the Exarchate in Southern France, in Italy and in North Africa.

without listening to the voice of the conscience of the overwhelming majority of the clergy and laymen, decided to submit the Church of the diaspora to the official government of the Church in Moscow. Everything was done in the most possible secret manner : all were placed before the fait accompli, which neglected all the contacts which are formally required with the legal canonical authority, that is, the Patriarchate of Constantinople. The whole thing was already in such an advanced stage that it seemed to be impossible to withdraw from it. When he was dying, Metropolitan Eulogy had put on the shoulders and on the conscience of his bishops, in particular the one whom he considered as his successsor, Archbishop Vladimir, an almost inhuman weight : to redirect all this agitation of demonstrations and, so to say demagogy, into a re-examination in accordance with the rules of conciliarity » (Жизненный путь митрополита -экзарха Владимира. П., 1957).

Vladyka Eulogy showed a great firmness of character, conviction and just insight when he refused to acccept the diktat which the Patriarchate of Moscow wanted to impose on the Exarchate by a decree which was issued just after the day of the death of Metropolitan Eulogy, that « the provisional jurisdiction of the Ecumenical Patriarchate over the Russian parishes in Western Europe, instituted in 1931, has formally and de facto ceased to exist, and that its parishes are placed again in the indivisible jurisdiction of the Moscow Patriarchate ; of which the Ecumenical Patriarch Maximos will be informed » (Журнал Московской Патриархи, М., 1946, n. 9, p. 7). The same decree has also named as successsor to Metropolitan Eulogy the former Bishop of the Russian Church Abroad Metropolitan Seraphim (Lukianov) who during the War has made a compromise with the Germans and had returned to the Church of Moscow and had taken the Soviet citizenship. « I take notice of it as a piece of information, but not of execution », answers Vladyka Vladimir to Metropolitan Gregory of Leningrad who had summoned him to the Soviet Embassy in Paris, on August 14, in order to hand over to him the decree of the Synod of Moscow.

Regarding this subject Protopresbyter Alexis Kniazev wrote : « Metropolitan Seraphim had been appointed head of the diocese of the late Metropolitan Eulogy […] This was impossible to believe : the sworn ennemy of Metropolitan Eulogy, the man who has behaved as a real follower of Hitler during the War, became the successor of the founder of our diocese […] Other detail, also amazing : this nomination took place just after the death of the Metropolitan, while a very pious custom, respected in the Russian Church, demands that a nomination to a See which has become vacant through the death of the Bishop who held it, happens only at the 40th day after his death. Again a more surprising detail : this nomination happened when the dimissorial letter of the Ecumenical Patriarch had not yet been received by Metropolitan Eulogy […] This nomination manifests the usual method of the Soviets, namely nominating to a responsable post men of bad reputation, which permits them to keep a hand on them and thus being in control of the situation ».

An Extraordinary General Assembly of the Exarchate, which united on October 16 of the year 1946 at Saint Sergius Institute, confirms the courageous decision of Archbishop Vladimir and elects him head of the Exarchate as successor to Metropolitan Eulogy. The Holy Synod of the Ecumenical Patriarchate ratifies this election on March 6 of the year 1947 and on July 8 of the same year Vladyka Vladimir is elevated to the rank of Metropolitan. The following year Metropolitan Vladimir welcomes the Ecumenical Patriarch in person when the latter during a short stay in Paris visits Saint Alexander Nevsky Cathedral and Saint Sergius Institute. Vladyka Vladimir gives again proof of his fidelity to the Ecumenical Patriarchate when in 1950 he makes a gesture to the Russian Church Abroad, proposing to its Primate, Metropolitan Anastasy (Gribanovsky), a project of reunion of the two jurisdictions under the authority of Vladyka Anastasy, but under the obedience of the Patriarchate of Constantinople.

During the diocesan Assembly of 1949, Vladyka Vladimir launches a prophetic appeal to all the Orthodox who had settled in Western Europe, without distinction of ethnic or national origins, to build one local Church : « Let us all unite in one Church in the countries into which God has led us, we ourselves and all our Orthodox brothers. Les us take all our efforts to build one united Orthodox Church in Western Europe ». In line with this appeal, Metropolitan Vladimir, during the following years, shows a grat concern for the future of the children of the Russian emigration who have to assimilate themselves with he countries which have adopted them, as well as for the Westerners who will decide to join the Orthodox Church. For that reason he gives his blessing to celebrate the Liturgy in the local languages, as certain parishes of the Exarchate (in Paris and Nice, in Belgium, Germany and Denmark) had already started to practice.

In 1957 Metropolitan Vladimir celebrates modestly a very rare jubilee : the fiftieth anniversary of his episcopal consecration. Messages of congratulation are sent to him by all the organizations of the Russian emigration. After a long illnesss Metropolitan Vladimir peacefully passes away at the age of 86, on December 18 of the year 1959, the eve of the feast of Saint Nicholas (according to the Julian calendar), in his small appartment next to the Cathedral of Saint Alexander Nevsky. His last words, just before he died, were : « Glory to Thee who has shown us the Light ». He is buried in the crypt of the church of the Dormition, at the cemetery of Sainte-Geneviève-des-Bois (Essonne).

Devoid of any ambition, Metropolitan Vladimir has never been seeking for any power. The circumstances have led him to accept it. He did not hide that he considered the power given to him as a heavy weight and that he was not fit for it. His extreme simplicity, his kindness towards all, his ascetical life in continuous prayer, but also his fidelity to the Canons of the Church, have brought him the general esteem in the Orthodox world. « He was one of the meek to whom belongs the Kingdom. His meekness was his weapon which gave him authority », in the words of Archimandrite Lev Gillet (Messsager orthodoxe, 1959, n. 8).