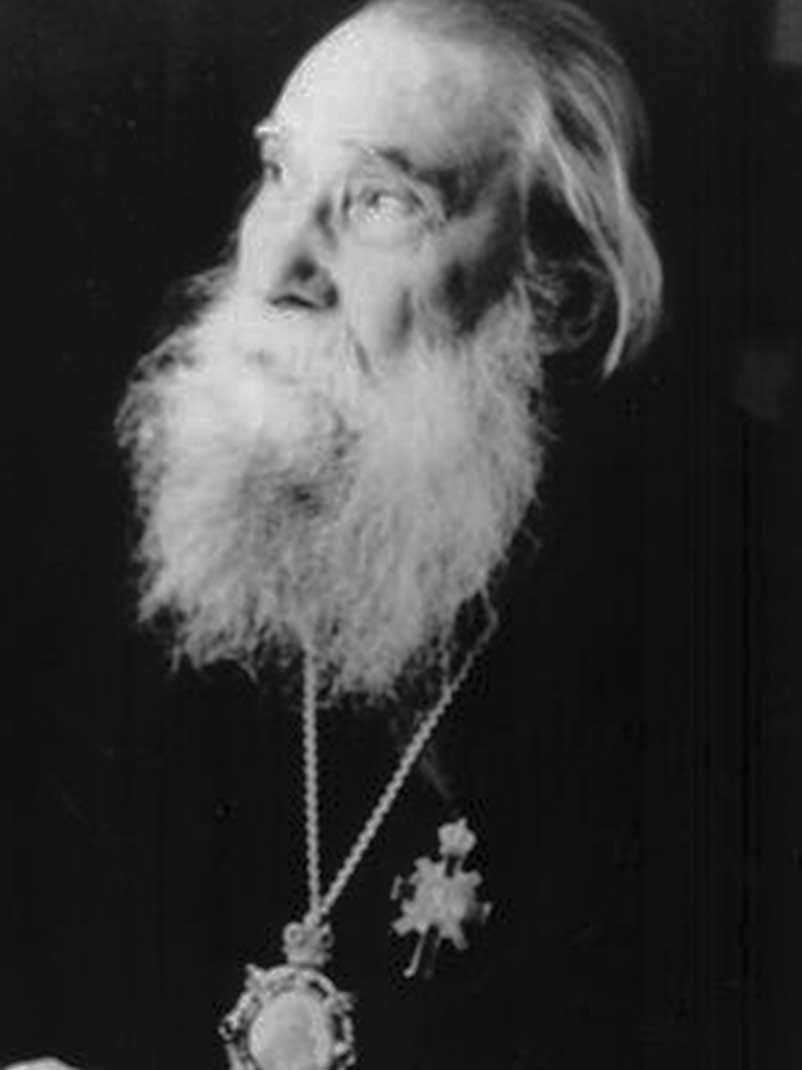 Archbishop George (Tarassov) has been heading the Archdiocese of the Russian Orthodox Churches in Western Europe for more than twenty years, between 1960 and 1981. During more than fifty years of priesthood he has taken part in the development of this Archdiocese. Everythng in the life of this prelate was unusual.

George Tarassov is born in Voronezh (Russia) on April 14 of the year 1893. After his secondary studies in his hometown, he studied at the Superior Technical School of Moscow, where he received the diploma of chemist engineer. Later he took courses in aeronautics and enlisted as volunteer in the imperial army, where he served in the aviation. In 1916 the Ministery of War sends him to France in order to study the working of the French military aviation. After the Revolution of 1917 he stays at the Western front and enlists as a pilot in the Belgian army with the rank of major. Demobilized in 1919 he settles in Belgium, where he works from1921 until 1934, as chemist engineer in several companies. In 1922 he marries Eugénie Freshkop who is remembered as a fervent christian woman.

On March 25 of the year 1928, Georges Tarassov is ordained deacon by Metropolitan Eulogy. He desired to serve the Church as a deacon for the rest of his life. However, on February 3 of the year 1930, unexpected circumstances lead deacon George to the priesthood, out of obedience to his Bishop. He is appointed Rector of the parishes of students in Ghent and in Leuven, which recently were left without a priest. In 1932, Father George underwent a heavy ordeal, the death of his wife. One year later he received the monastic tonsure. In 1940 he is appointed Rector of the parish of Saint Panteleïmon in Brussels (rue de la Tourelle), which did not prevent him from serving other parishes in Belgium. Among his parishioners he developed an exceptional zeal and became a living image of pastoral love. During the German occupation he was arrested twice at least. One time his interrogation lasted ten hours without interruption. When Archbishop Alexander (Nemelovsky), auxiliary to Metropolitan Eulogy in Belgium, was deported to Berlin, Father George ensured also the pastoral work in the church of Saint Nicholas (rue des Chevaliers).

When Archbishop Alexander returned after the end of the War he chose to join the jurisdiction of Moscow, while Father George Tarassov remained faithful to the Patriarchate of Constantinople, and its new ruling Bishop, Metropolitan Vladimir (Tikhonicky). The latter elevated him to the rank of Archimandrite in 1948. Being elected auxiliary for the Benelux and the Federal Republic of Germany, Fr George is ordained Bishop on October 4 of the year1953, in Paris by Metropolitan Vladimir, with the benediction of Patriarch Athenagoras and the Holy Synod in Constantinople, receiving the title Bishop of Syracuse.

After the death of Metropolitan Vladimir, the General Assembly of the Exarchate, united on June 12, 1960, chose Vladyka George to succeed the deceased Matropolitan. This election is confirmed by the Ecumenical Patriarchate on October 10 of the year 1960. Having become Archbishop and Rector of the Cathedral of Saint Alexander Nevsky in Paris, Vladyka George continued the pastoral activity which he loved and he did not cease to visit the cities and countries of his flock. But in 1965 he had to endure another ordeal. The ecclesial organism he was charged with had the status of « Provisional Exarchate of the Ecumenical Patriarchate » since 1931. However, a letter of Patriarch Athenagoras of November 22 made an end to this administrative status of the diocese. Vladyka George had to take upon him the difficult task to safeguard his parishes from disruptions and eventual interferences. In these circumstances he had the courage to proclaim the independence of the Archdioce on December 29, which was confirmed at the General Assembly of clergy and laymen in February 1966. After this Archbishop George had to face another problem : how to consolidate and regularize the canonical ties which still existed between the Archbisdom and the Patriarchate of Constantinople ? In order to accomplish this task he found in the person of his diocesan secretary, Cyrill Kniazeff, an energetic advisor. This resulted in a letter from Patriarch Athenagoras and the Holy Synod of January 22, 1971, which again confirmed the attachment of the Archdiocese to the Ecumenical Patriarchate. This act sealed both the canonical existence of the Diocese as well as its internal autonomy.

Archbishop George was deeply imbued with the Russian Orthodox tradition and piety. However, at the same time he widely opened his heart to each person who shared with him the love for the Christian truth. The founding, during the last years of his life, of new Orthodox communities where the Services are held in French and in Dutch, in the regions where he had started his pastoral ministry, in Brussels, Ghent and in Holland, was for him a great joy.

Vladyka George dies on March 22, 1981, after a long illness. His last message to his clergy, and, through them, to his faithful, was as follows : « Tell them that I love them all » - words that characterize this humble and coureageous pastor.

His body reposes in the crypt of the church of the Dormition at the cemetery of Sainte-Geneviève-des-Bois, in the same tomb as that of Metropolitan Eulogy, the founder of the Diocese, who had ordained him to the diaconate and the priesthood.