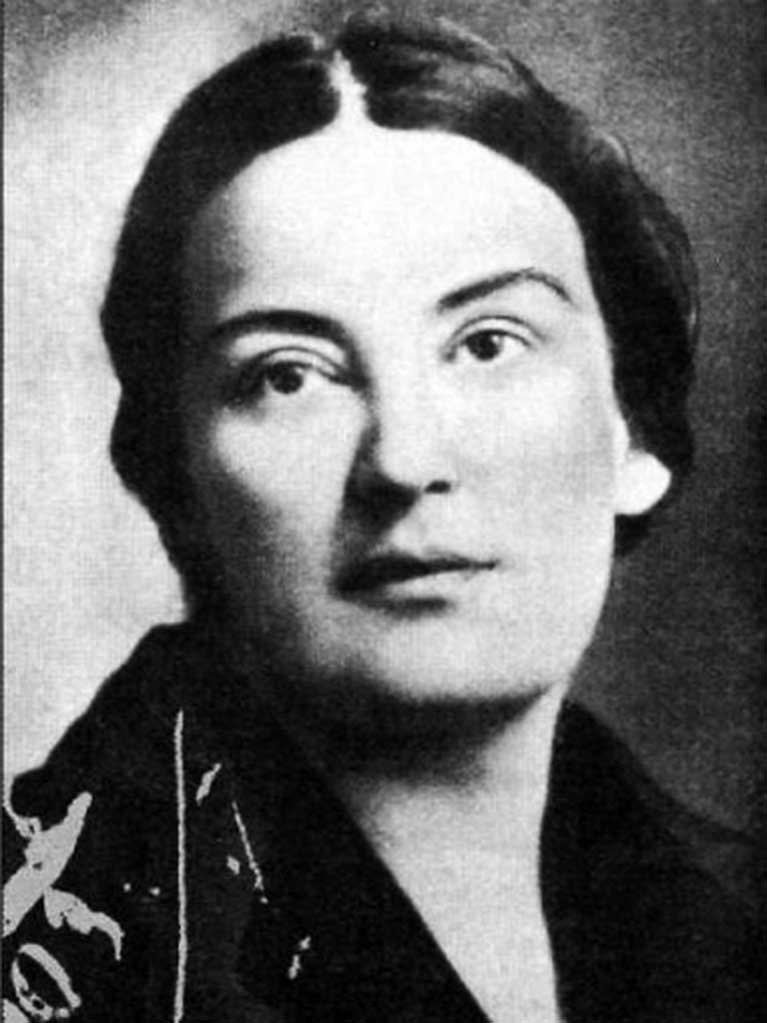 Mother Mary represents the spiritual and religious renewal that Russia experienced at the start of the 20th century. Although descended from an aristocratic family, she was, by conviction, a revolutionary socialist. She married a socialist intellectual at a very young age, then they separated. At this time, the Russian Revolution arose and she emigrated with her second husband, Daniel Skobtsov. He had been her judge when she was arrested by the White Armies, who accused her of having collaborated with the Bolsheviks. Skobtsov was part of the White Army, so they had to go into exile when it was defeated by the Red Army. They therefore left Russia and, via Constantinople, arrived in Paris. They then had three children, Gaïana, Youri, and Anastasia.

Elisabeth Pilenko (who would later become Mother Mary) had lost her faith in her adolescence, with the early death of her father, which she felt was an injustice. Now, if God is not righteous, he cannot exist. She no longer believed in God, but continued to be interested in theology. Thanks to her family's relations with the Russian aristocracy, she had been able to study theology by correspondence.

The loss of her last daughter was a terrible shock. The death of her child appeared to her as a call to start a new, purer life consecrated to God.

Through this great mourning, she felt called to do a work that could be called charitable or philanthropic. She felt the need for an ecclesiastical consecration for this new ministry, and wished to become a nun. Her husband agreed to this, and they parted ways.He respected her freedom, understanding that she felt to be « called », and they always remained friends.

Elisabeth Skobtsov (who was to become mother Marie) in 1926

However, it was the Church and the Orthodox who found it difficult to accept that a twice married woman could enter religious life. She made her vows and received the name of Mary, in memory of Mary the Egyptian, a great sinner who became a saint.

Ladies Tamara Klépinine and Elisabeth Behr-Siegel share in the interview below their memories of the social action of the one who was to become Mother Mary.

An open house, in an apocalyptic era

She therefore became a nun in this Church of the Russian emigration, which was then inspired by an evangelical current. Mother Mary felt called to give herself entirely to the poorest. Without money, but thanks to all kinds of friends, in particular ecumenical friendships, she was able to buy a house, first Villa de Saxe, in the 7th arrondissement of Paris, then rue de Lourmel, in the 15th. This house cannot really be called a monastery, because it housed all kinds of people: homeless people, tramps, former prostitutes that Mother Mary sought to get out of prostitution, sick people sent to psychiatric hospitals. because no one understood their language. At the same time, it could receive Catholic choirs passing through Paris.

It was a very open house, which moved away from the model of Orthodox monasticism. This is traditionally a cloistered monasticism. But Mother Mary believed that times had changed, and that she belonged to another era, an apocalyptic era, in which she had to go so far as to sacrifice the « spiritual comfort » of her life. The main thing was to come to people, to help them, to love them, to be witnesses of the limitless love of which the monk of the Eastern Church, Father Lev Gillet, speaks.

We often forget to mention the very important influence that the one who signed his books "a monk of the Eastern Church" had on Mother Mary. This monk was one of the first to live in this house and to celebrate services there. And this boundless love for the poorest was manifested in the actions of Mother Mary: she went among other things to the markets of Les Halles, and collected what was left to the merchants. She also visited the tramps in the bistros around Les Halles, and sometimes brought them to her home. 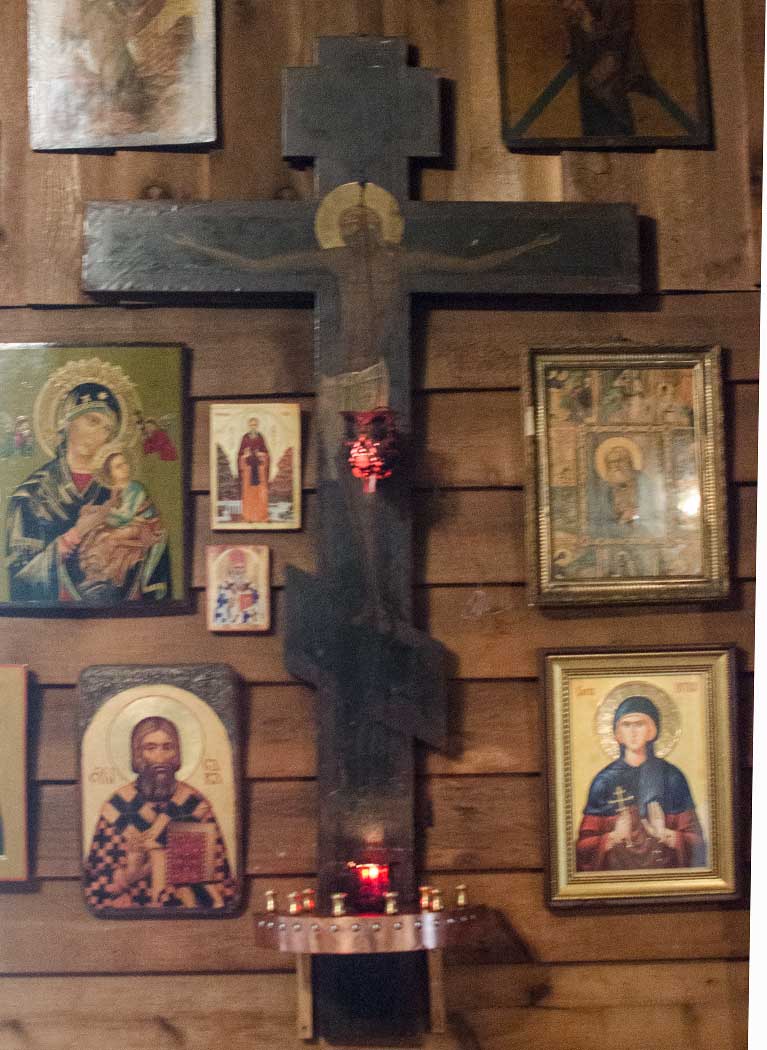 The church of Lourmel was closed in the 1970s. Many religious objects, such as the above cross as well as religious clothes embroidered by Mother Mary, can be found today in the Church of Saint Seraphim of Sarov rue Lecourbe in the 15th arrondissement.

This exceptional woman did not hesitate to protect Jews during the Second World War. Mother Mary had a Jewish friend, Elijah Fondaminsky, who had been baptized after being arrested and transferred to a concentration camp. At that time, Mother Mary felt called to come to the aid of the Jews. She welcomed them into her house, and the priest who had replaced the monk of the Eastern Church at that time issued them false baptismal certificates, to allow them to pass into the free zone.

The Jews knew that Mother Mary was resistant. During the Vél'd'hiv 'roundup, I was contacted by a Jewish friend to come to the aid of a Jewish mother and her daughter caught in the roundup, and Mother Marie succeeded in saving them. Until 1943, Mother Mary was able to help the Jews in this way. What she did was not always understood by the Orthodox, and it is even said that she was betrayed by someone from her household. The Gestapo came to arrest her son, Youri, as well as Theodore Pianov, who was her secretary, and the priest, Father Dimitri Klepinin. She was told that if she came to the Gestapo, they would be released. Mother Mary went there, and was also arrested to be deported to the Ravensbrück camp, where she ended her days.

"My pyre will burn here, in a foreign land"

Many testimonies on Mother Mary have been brought back from the concentration camp, and in particular that of Geneviève Anthonioz-de Gaulle. She recalled her courage, and those moments when, in the evening, everyone gathered around her pallet, when she restored strength to all the deportees who were there. Mother Marie continued to embroider herself. She was an extremely skilful woman, both painter and poet, and in the camp she continued to embroider or paint icons. Finally, she was struck by dysentery, and transported to what were called "youth camps", an ironic term for this place where the incurably sick were sent. The exact circumstances of its end are unknown. Geneviève Anthonioz-de Gaulle thinks that she died of exhaustion, in a very great loneliness.

Others say that she took the place of a young deportee condemned to the gas chamber. Either way, it remains obvious that she had given her life.

Her poems speak of this gift, like this one, composed when she was still in Paris:

I know the pyre will light

My pyre will burn,

Song of my sisters,

In the Kremlin, in the place of executions

Or here, in a foreign land.

She also wrote the following poem:

Here is the soul lifted up in its essential solitude

Only you and me,

Your light, my sin.

Here I am at my limit

Your sun points to the East.

Renouncing spiritual comfort to open up to the poorest

In short, one can think from a certain point of view that her life has been a complete failure: she is dead, her children are dead. However, she plays an important role in the Russian emigration. It is now beginning to be discovered in the United States, notably through a recent book (Michael Plekon, Living Icons, Persons of Faith in the Eastern Church, University of Notre Dame Press, Notre Dame, Indiana) where a chapter is devoted to her life ("Maria Skobtsova: Woman of Many Faces, Mother in Many Ways"). One of her friends recounts his dream, in which he sees her in a wheat field. He cried out to her: "Mother Mary, but I was told that you were dead! ", and she replied:" Oh, people say so many things. You can see that I am alive ".

Thus, the memory of this woman remains very strong for those who saw her live. She is recognized as righteous among the Jews, and as such a tree has been planted in her memory. Her temperament is also one of her outstanding features: she was a modern woman, she was a nun who smoked, she was a strong woman. Among those who appreciated her, it should be remembered how Metropolitan Eulogy recognized and protected her. Though some traditional Orthodox criticized her, he trusted her, and he gave her the right to preach at the end of the liturgies when she went to the provinces. So when she came to Lorraine to visit the Russians scattered there to work in the mines and steelworks, she would attend the liturgy, and, at the end, deliver the homily.

She wrote her diary, she wrote articles, and we see by these gestures that she hoped for a kind of renewal of monasticism. This can be overstated as there is still a place for traditional monasticism. But Mother Marie thought that the monks should give up their spiritual comfort, that they had to open the doors to the poorest, learn not to seek the beauty of songs and the smoke of incense, but first to open the doors. . She was in a way a deaconess, the restoration of this ministry being discussed nowadays, in the Orthodox Church as well as in the Catholic Church. But this idea still goes against any notion of renewal. One of the great difficulties of the Orthodox Church is indeed this tendency to consider that Tradition is a repetition of the past, whereas it is the living transmission of the truth, the living transmission of the faith.

The canonization of Mother Mary was made in Paris on February 11, 2004 by the Diocesan Council of the Archdiocese of Russian Orthodox Churches in Western Europe, chaired by His Eminence Archbishop Gabriel (de Vyder). The common feast of the newly canonized is July 20.

The « rue Mère Marie-Skobtsov » in the 15th arrondissement of Paris

Rue Marie-Skobtsov is a public street that begins at 84-88, rue de Lourmel and ends in a dead end, in the shape of a loop, just in front of n ° 77 where Mother Marie had set up her reception center. For Philippe Goujon, mayor of the 15th arrondissement, this street in the name of Mère Marie (located a stone's throw from the rue de Lourmel) was logical and above all essential. The municipal council of the 15th arrondissement voted the name “rue Marie Skobtsov” on November 4, 2013, followed by the Council of Paris unanimously on November 12, deliberation n ° 2013 DU 313-1. The street was inaugurated on March 31, 2016, in the presence of the Russian Ambassador to France Alexander Orlov.

"Mother Mary wanted her faith to be a witness lived in practice," the Orthodox theologian Élisabeth Behr-Sigel confided in the newspaper La Croix in 2004. Mother Marie felt that she had to give everything and give herself completely. There is, for us today, a call to the authentic absolute. Basically, she remained socialist-revolutionary until the end. The call to the holiness of God passes, for her, through an aspiration for deep social justice. "

Some poems from Mother Mary