Father Alexis Medvedkov at the time of the revolution

Alexis Medvedkov was born on July 1, 1867 in the village of Fomitschevo, Ouïezd de Viazma, Government of Smolensk (Russia). His father, John, a country priest died soon after his birth, leaving the family in poverty. Alexis first studied at the ecclesiastical school before being admitted to the theological seminary of Saint Petersburg from which he graduated in 1889.

On leaving the seminary, he was ordained reader and held this office for five years in the Church of St. Catherine on Vasilievsky Island. At the same time, he got married. He was reluctant to become a priest, however, out of modesty, although many people encouraged him to do so. He then goes to Kronstadt to ask Father John for advice.This priest, now canonized, already enjoyed at the time a reputation for his holiness which extended throughout Russia. This encourages him to choose the path of the priesthood.

On Christmas Eve 1895, he was ordained a deacon, then a priest two days later. In January 1896, he was entrusted with the parish of the Dormition of the Mother of God in the town of Vrouda. He remained there, serving as a priest, for 23 years. The parish of Vrouda is then a poor and rural parish to which 13 surrounding villages are attached. Due to the destitution of his parish, he had to work in the fields while at the same taking care of his religious obligations and performing the same agricultural work as his faithful parishioners, most of them peasants. 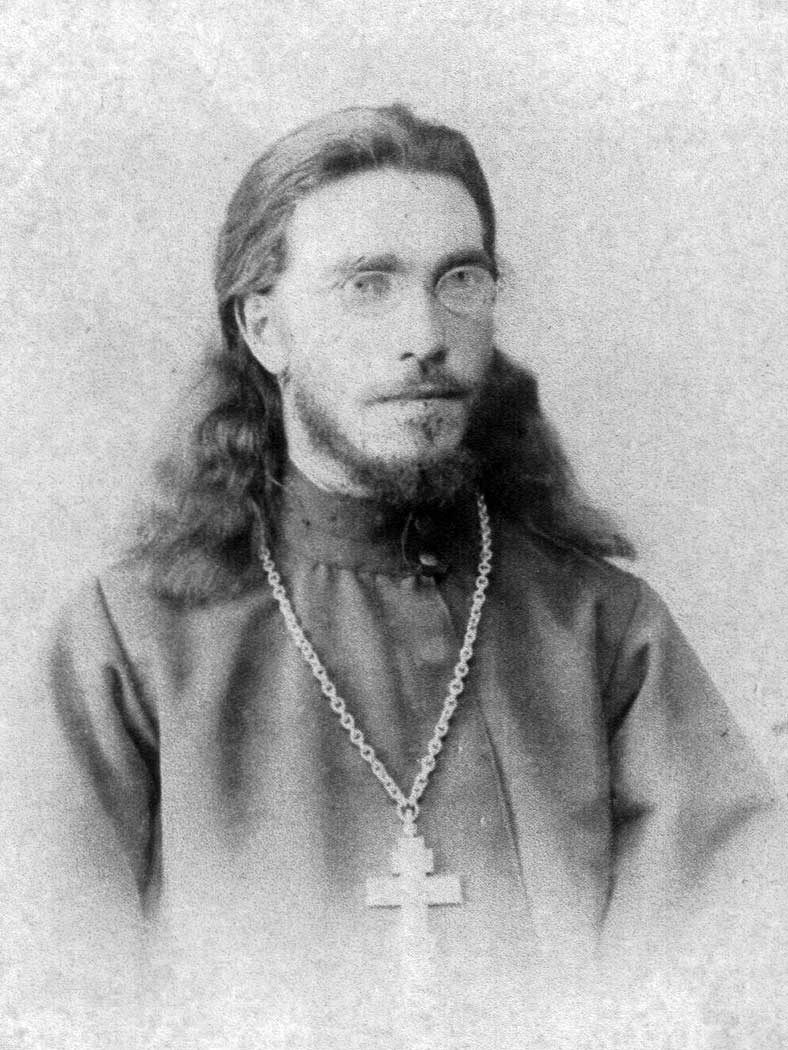 He makes a point of educating his parishioners, sometimes reading the Fathers of the Church all night long to prepare his sermons. He often visits the orphanage and thanks to his efforts two new schools are opened in the village, which makes him highly esteemed in his parish and among other priests in the region.

Revolution and exile in Estonia

But the outbreak of the revolution in 1917 profoundly changed his life. The Church is now persecuted by the Bolsheviks who want to eliminate in particular all the clergy. Father Alexis is arrested by the Tcheka. He was then thrown into prison and tortured. His torturers broke his arms and legs, and he is beaten so badly that his facial nerve is partially torn. He kept the scars of these tortures on his face all his life, and only escaped death thanks to the intervention of his daughter who became hostage for him. He is then released.

Because of the unrest that rocked Russia in the following years, Father Alexis and his family went into exile in Estonia, which had just obtained independence. They settled in Kohtla-Jarve, which was then an industrial region attracting many immigrants because of its shale mines. The working conditions there are so harsh that Estonians do not work there and prefer to employ Russian immigrants, a labor force that is abundant in number and inexpensive. Father Alexis was forced to work in these mines as a worker to feed his family, but his health, already bad because of his detention, deteriorated rapidly.

In 1923, he was appointed priest of the parish of Levve. In 1926, his wife fell ill and died in 1929. Little loved by the local clergy whose humiliations he had to endure, he then turned to Western Europe and asked Metropolitan Eulogy, of the Archdiocese of Russian Orthodox Churches in Western Europe, to welcome him into his jurisdiction.

Priest in Ugine and end of life

In December 1930, Father Alexis was appointed rector of the newly created Russian parish in Ugine. Ugine was then an important center of steel industry whose factory employed several hundred Russian immigrants. However, his parishioners are very divided among themselves because of different political and ecclesial opinions. With a gentle and withdrawn character, Father Alexis is well disposed towards all his parishioners and seeks to make peace reign. He spends his time in the church where he prays constantly. He also secretly gives part of the money he receives to poor people. 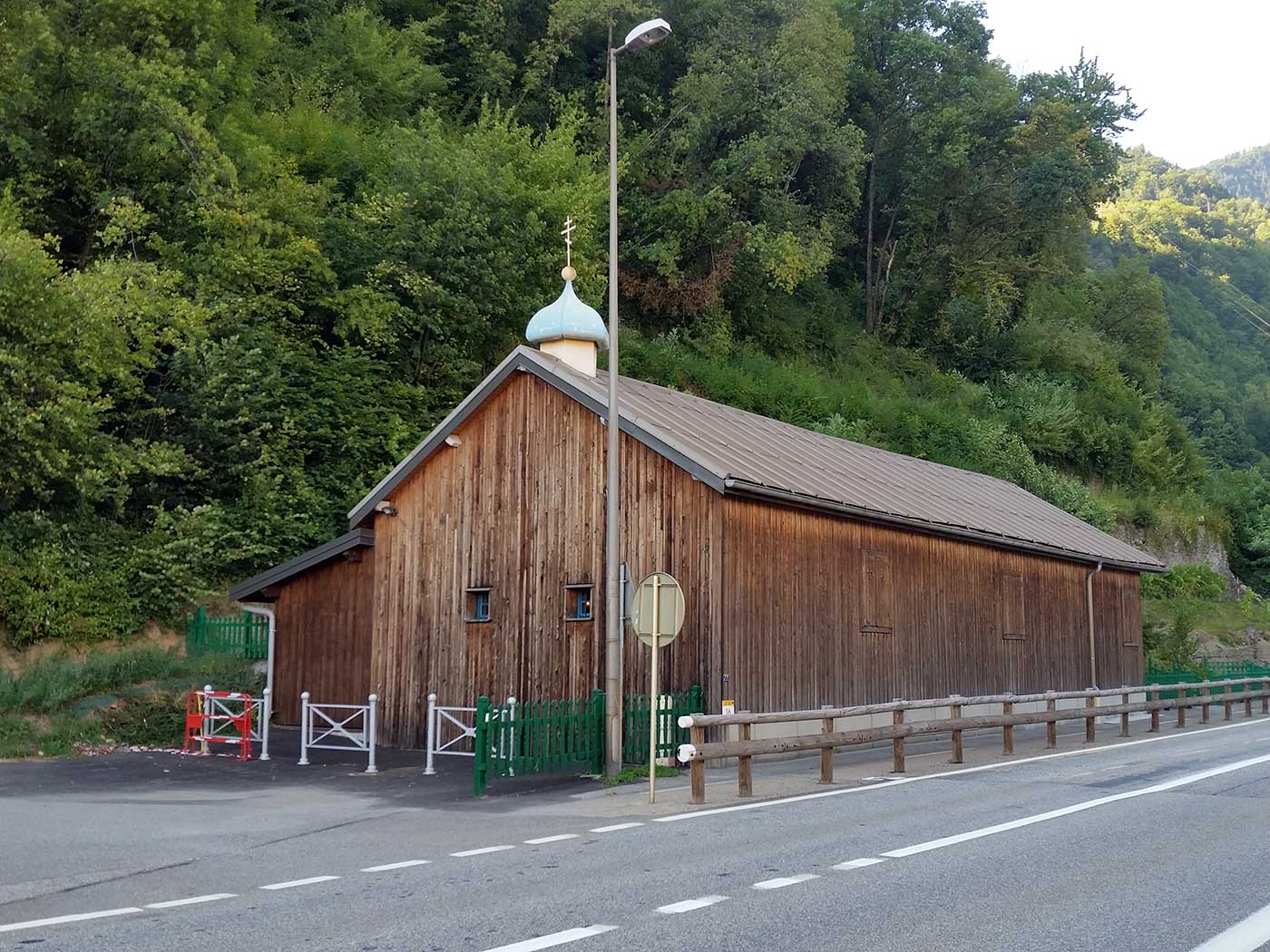 But a small part of his parishioners did not like him and he became the object of sarcasm. He is even slandered in front of the Metropolitan. However, the majority of the parishioners, being scandalized, supported their priest and the minority which was hostile to him was repudiated. Exhausted by all these ordeals, Father Alexis fell very ill and was forced to stay in bed permanently. His condition worsened and in July 1934 he was hospitalized in Annecy where doctors diagnosed stomach cancer. He then asks that those who slandered him come to his bedside to ask forgiveness and he blesses his parishioners. The day before his death, he takes Communion and receives the anointing of the sick. That day, the sick in neighboring rooms heard him singing religious songs.

He died on August 22, 1934 early in the morning. It was only after his death that it was discovered that he was suffering from generalized cancer. He is buried in Ugine in the presence of several hundred people. Even people who had criticized him in the past

Exhumation of relics and canonization

In 1953, the municipality of Ugine decided to build buildings on the site of the cemetery and suggested that families have the remains of their relatives transferred to the new cemetery, within 5 years. The priest of the Russian parish then decides to have the body of Father Alexis transferred.

On August 22, 1956, exactly 22 years after his death, the gravediggers began to dig his grave. Having reached a depth of 1.20 m, they are prevented from continuing their work with their tools by an unknown force and then continue to dig by hand. To their immense amazement, they find the remains of Father Alexis incorrupt, even though his coffin was decomposed. His body is even flexible. A doctor is called in and asserts his unbelief, stating that « never has a man who died of widespread cancer escaped decomposition. It’s a real miracle! » A crowd of curious people then goes to the cemetery to see the phenomenon first hand.

The body could not be buried in the new cemetery until three days later, during which it suffered no damage although it had been left in the open. On September 30, 1957, the coffin was reopened and the body transferred to the crypt of the church in the Russian cemetery of Sainte-Geneviève-des-Bois.

Saint Alexis was canonized on January 16, 2004 by the Holy Synod of the Patriarchate of Constantinople and his canonization was solemnly proclaimed in Paris on May 2, 2004 by Archbishop Gabriel of Comana in the cathedral of Saint Alexander Nevsky.

On October 13, 2004, his holy relics were transported from Sainte-Geneviève-des-Bois to Bussy-en-Othe and deposited in the Church of the Transfiguration, recently built to serve as the main church of the monastery of Our Lady of the Protection. 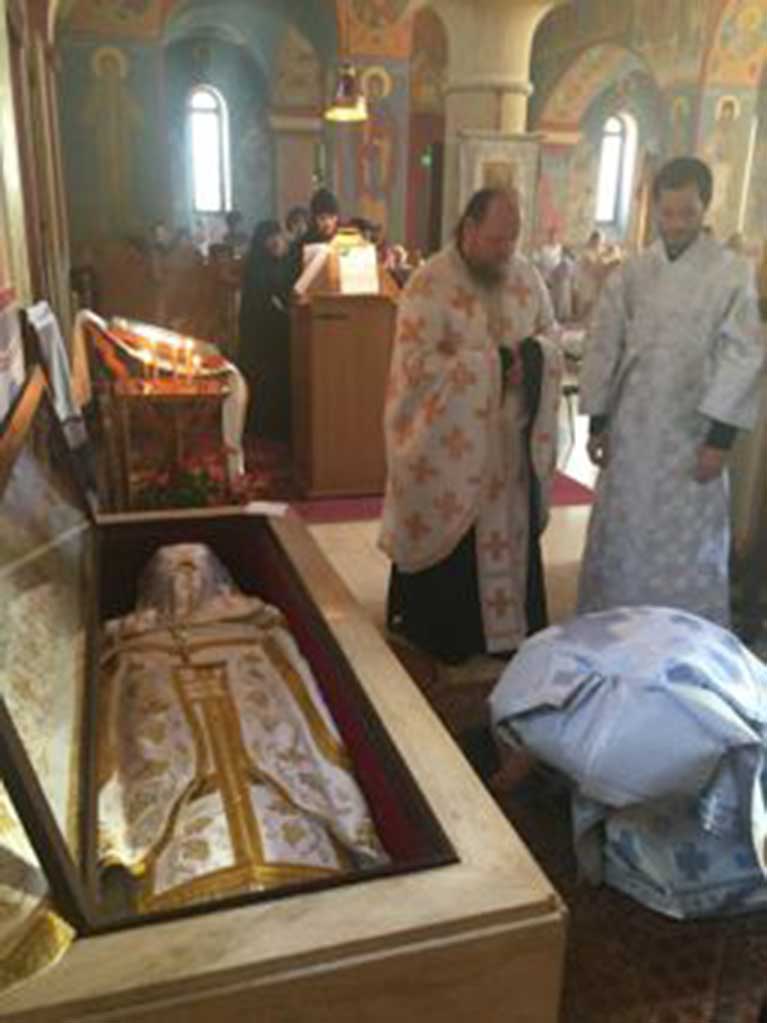 Relics of Saint Alexis of Ugine